(NEWSER) – If you find yourself in Cleveland, keep your strip club opinions to yourself. So learned Antonio Cummings early Saturday. The 24-year-old from Orlando, Fla., was at the Ohio city’s Lido Lounge for a birthday party, WKYC reports, and while standing outside of the club, Cummings got into an argument with a guy identified only as Mike.
The two were debating the difference between strip clubs in Florida and Ohio, and the argument turned into a fight that culminated in Mike allegedly shooting Cummings in the left thigh then fleeing in a vehicle. Friends took Cummings to the hospital. The investigation (into the shooting, not which state has better strip clubs) is ongoing.

I guess since this is a Florida site, you would expect me to have Antonio Cummings back here. Defend Florida’s honor and go on a tirade about Mike how he’s just some slug from Cleveland and how their strippers probably look like beat up dogs. Nope! Any guy who has ever been through Orlando knows that the biggest flaw to one of the largest vacation spots Florida has to offer is that they have the biggest bull shit law ever about strip clubs. Girls essentially have to hover over your dick by at least like a foot. What the fuck is the point of that? They wear pasties and g strings, charge over priced drinks, and are basically hovering over your dick or dancing around you like a lunatic. Sure you could try to bribe her into fucking her after but still, maybe its 3 am and I want to get a few lap dances first so i can take the ride for a spin to see if i want to fully commit to paying for sex. It’s a bullshit rule. Its a terrible time for me and terrible for the ladies cause no chance in hell I tip her enough to buy McDonalds if she doesn’t rub her ass against me or nearly smother me to death with her tits. So I don’t know what the fuck Antonio can be arguing for here. Are Cleveland strip clubs even worse than Orlando strip clubs or something? Can’t be right? they don’t have the political strings being pulled by Micky Mouse and they seem like a place that are pretty much at the point where they could openly solicit prostitution there. I base that solely on the fact that the Browns and all of Cleveland stinks so they turn to prostitution to ale their woes. 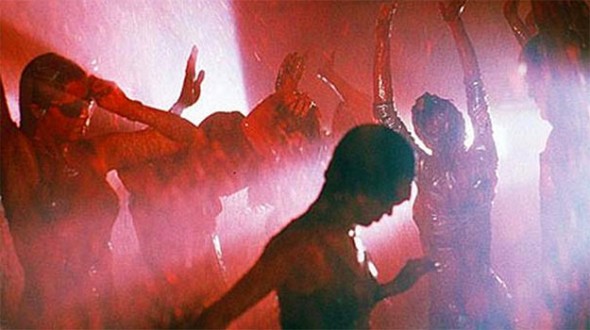 Source- After news of the Blood Rave in Amsterdam swept across social media a few weeks ago, news of an identically inclined blood rave will take place during New York’s Comic Con, featuring electronic music pioneers The Crystal Method as headliners, as well as featuring Pictureplane, The Dance Cartel, A Place Both Wonderful And Strange, and DJ Choyce Hacks.
The party will also include sword fighting, cosplay actors, a chill-out room based on the hyper-modern apartment of Blade villain Deacon Frost, and several secret guests.
Since this is America, fake blood will be used – a proprietary combination that Thump was able to try out first hand last Friday at a press preview.
The party is being put on by BBQ Films, who specialize in “transforming iconic movie scenes into immersive parties.” They’ve recreated the going-out-of-business party from Empire Records, and this latest venture is sure to match expectations.
If you’d like to attend, tickets are available here.
Blade Rave will take place on October 9, 2015 at New York’s Terminal 5. THUMP readers get reduced-cost tickets with the discount code “IMMERSIVECINEMA”.

So i guess this is gonna become an on going thing now? Blood Raves are whats hot for 2015 and beyond.  Before we start popping molly with fake blood pouring down our faces lets just clear the air for a second. The Amsterdam Blood Rave should be the only Blood Rave worth going to. After i blogged it i guess Blood Raves just took off (only 2 so far and i probably was inconsequential but whatever). That ones on Halloween which just makes it that much more special and acceptable. If you just get doused in blood on a random Fall Friday then you’re gonna look like a weird person. Trying to take the subway in that and people are gonna look at you like you’re some freak who looks like a giant tampon. And as much as i hate to say it, The Netherlands is a much better place to have something like this where they dont have the restraints of American Safety laws. I mean fake blood? thats not how Deacon Frost rolls. I know it sounds crazy but i need them to at least attempt to get real blood. Yea if you have to spill pigs or something but you got to at least try to get the real deal like the Netherlands rave.

Also knowing this is some sort of business set up by a company that does these things, making scenes in real life kind of takes some fun out of it. The other rave was just about a rave inspired by Blade. This one Is like trying to re make scenes and all that nonsense. If im there im there about the Blood Rave itself and not because its a business that recreates iconic scenes from movies. If i wanted to be apart of some weird fake blood fueled life imitating art thing thats one thing but this should be about another thing entirely. its about taking drugs and having chicks and guys getting super horny about the fact that blood is gonna rain down on them and there might be a little pain/ sex/drugs involved. Something tells me there’s gonna be an asshole telling you you can’t have sex in Deacon’s swanky New York apartment in this version of a blood rave and that’s just not right. If I’m on drugs humping and grinding all night to EDM music getting blood, real or fake, sprayed on me I’m gonna want to have sex with the closest piece of ass that will let me. That’s just how vampires do it.

Sidenote- I dont know a thing about Crystal Method aside that they have one song on Need For Speed Underground but in my head they would be whats playing at a blood rave.