Since day one I knew Ekblad was going to be something special. The size, the skill, the hair. He has it all. After the trial playing period i knew he was gonna stay in the big leagues. Too much talent to send him down to San Antonio. Kid broke Jovo’s rookie record and damn near broke Bobby Orr’s record. Played almost every game and logged second most minutes  on the top D pair with Brian Campbell. He’s not facing 3rd or 4th line guys here, He’s going against the top line guys. He was a huge contribution to the team and because of that, the cats were on the edge of the playoffs. If it wasn’t for the goalie situation and the flu that half the team got, im almost sure we would’ve gotten the WC spot and probably woulda taken Montreal to 7 and possibly coulda made it to second round playoffs. Ekblad’s been such a contribution this year and not to mention he did it while being 18. EIGHTEEN! 18 years old to play the second hardest position right away in a position that usually takes 300 games to develop and bring up to NHL level and he did it right away. Thats what put him over the top in scoring for the Calder.

People saying Gaudreau and Stone got robbed can go kick ricks. The scoring was close and those 2 are also important for their team but Defense is just a harder position to play. Don’t get me wrong their 60+ points goes along way for any team, but those guys are like 21 and 23. Their mentality should be at the exit stage of the term rookie. Ekblad’s 18 and made a huge difference in the outlook of the Panthers since the beginning of the season.

Ekblads gonna be at the NHL awards for years to come and god damn i hope we keep him here in Florida. I dont know how hopeful i can be that he’ll spend a majority of his career here but one can dream. He’s gonna follow in the footsteps of Lidstrom. His agent is Bobby Orr. He has Denis Potvin speaking to him every night. The best day of my life is gonna be when i get to touch the cup with him by my side cause i swear to god he’s gonna win a cup. Stanley cup, Conn Smythe, Norris, Gold Medals, Lady Byng everything. I can see him winning it all in his future. Best of all is he hardly even cares about the Calder. He knows its not enough. He’s ready for a cup already at 19 and fuck so am i.

P.s- Did i mention he is pretty much a pro model? If he wasn’t dating Claude Lemieux’s daughter he could fuck any girl in Miami and Ft. Lauderdale combined. the white ones at least.

Bet he didn’t want to take that shit after realizing he did once he left the arcade. Not because he has shit smeared in between his butt cheeks. Not even because he’s not on the internet as some scum bag public shitter with a gambling problem. But because he was dialed in on winning and that one brief moment took away his concentration. Yea the other things are bad too, but he had the chance to achieve something great. You could tell he was fighting it the entire time. Legs crossed and fidgeting every second. After the quick pit stop away from the machine he knew it was the wrong move, he even decided to switch up the game plan because he knew he had to be in the zone and focused.

Concentration can’t be broken not even for a second. Thats how you win at video arcade slots. 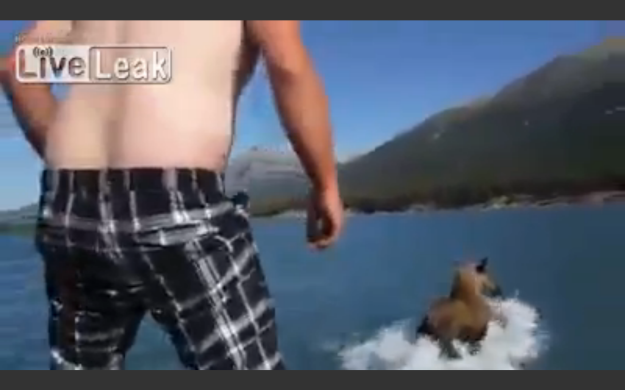 Pretty awesome. Being in the vast wilderness landscape of the lesser known America probably crushing an awesome wilderness weekend with your boys. Finding a god damn behemoth of a creature like a moose swimming across crystal blue lakes. You know you gotta conquer that bad boy like you’re Teddy Roosevelt or something. Maybe formed a bond with a special creature in the wilderness. Great time. Unless of course, you just nearly broke that motherfuckers back and theres a strong chance he wants to buck your ass and stomp you to death with his massive moose feet. In that case its pretty messed up to hop on his back and potentially drown him in water. I’d stick with the 1st story though.

Well that’ll end the party real quick. With the combination of a kielbasa and a broad sword that was the really only possible outcome for the night. Frankly the guys lucky he didn’t get flat out decapitated. Well that depends on what you prefer more, live with a nose that might look weird like Michael Jacksons after the surgeries or dead. Might chose death instead of the ridicule.

By far the weirdest thing to pursue when you’re 14 years old. I mean i know when we’re young we have higher aspirations. When I was young I wanted to be a paleontologist. Fucking weird looking back at it now. I got an A+ in Earth Science and thought from there I could find ancient T-Rex bones. That career path would lead to at least some nobel prize or something (maybe I should of stuck with that career path). Becoming a professional limbo dancer and excelling at it is a whole new level of aspirations. Its like the biggest niche market in the world. No one wants to see the limbo dancer go low at parties. They want to see the limbo dancer with the bar set comparatively a mile higher than this lady’s usual routine, and knock that shit down and then everyone laughs and cheers and drinks. Limbo lady here is about as useful as a quick instagram video to show your buddies, after that, her job sucks and is useless.

Rachel Dolezal today insisted that she is ‘definitely not white’ as she slammed suggestions that she is taking part in ‘some mockery blackface performance’.
The beleaguered civil rights activist appeared on the Today show just a day after she resigned as president of the National Association for the Advancement of Colored People’s (NAACP’s) Spokane chapter amid the controversy over her racial identity.
In the unapologetic live interview – her first since the start of the scandal – Dolezal said she would do nothing differently if her younger self knew what she knows now, claiming that her life has been about making choices for her ‘survival’.
When asked by Today host Matt Lauer if presenting herself as a black woman for years was akin to wearing blackface, she insisted that was not the case.
‘I have a huge issue with blackface,’ she said. ‘This is not some freak “Birth of a Nation” mockery blackface performance. This is on a very real, connected level. I’ve had to go there with the experience, not just a visible representation.’
n another interview with NBC Nightly News, which will air this evening, Dolezal said: ‘I definitely am not white’, according to a post by Savannah Guthrie.
Dolezal was also asked by Melissa Harris-Perry on MSNBC if she was black and she responded simply: ‘Yes.’
She said that she had always felt a ‘spiritual, visceral’ connection to ‘the black experience’.
‘I was socially conditioned to not own that and to be limited to whatever biological identity was thrust upon me and narrated to me, and so I kind of felt pretty awkward a lot of the time with that,’ she said.
On the Today show, she claimed that she first started seeing herself as black when she was five.
‘I was drawing self portraits with the brown crayon rather than the peach crayon, and black curly hair,’ she said. ‘That was how I was portraying myself.’
But when Lauer held up a photo of Dolezal as a teen – with blonde hair and a fair complexion – she conceded that she looked like a white person and that she was not identifying as black at the time.
Her estranged parents, who outed her as white last week, have previously said that she began ‘disguising’ herself as black around 2007.
But in the interview, she would not answer questions about how she has changed her appearance to seem black. Her hair is worn in tight brown curls – a far cry from the blonde locks of her youth.
‘I certainly don’t stay out of the sun,’ she offered.

Seriously, she’s not exactly the leader of the largest movement ever. If she thinks she was influencing the voice of a nation she should try a place with more than 5k people. But now what i hate her more for the fact that she seems like such a brag like all these art historian type people are thinking they’re better than what they are. Hey guess what lady, you lied and took advantage of being black to get ahead probably over other black people.

Then reading this i wanted to puke. Drawing “Self Portraits?” Fuck out of my face with that, lady. She makes it sound like she was painting the Mona Lisa or some elaborate Salvador Dali self portrait. Bitch, you were drawing stick figure crayons. I don’t care about the brown or peach color nonsense. I hate how you try to be better than what you are. It’s annoying and such a fucking asshole move. Come to think about it saying you were the NAACP president of Spokane is also an asshole move too. Probably the smallest chapter in the history and entire NAACP total.

Obviously people were giving PETA shit about this and they absolutely should. The argument is dumb. CGI has come along way but anyone who’s made movies would tell you practical looks a million times better when used right. I mean just that picture above, as awesome as looks with a fucking sea monster dinosaur breaching water looks all CGI and fake. Looking back at the original Jurassic Park, these dinosaurs pale in comparison.

Thats the difference. Theres a real element of fear when you use things as real as can be. That T rex is the truth. They sculpted and built that mother fucker so real looking that if it were in the streets right now standing still i would pee down my leg and run for my life. Real will always just look better than CGI when done right. CGI looks about as scary as a stuffed animal. Its like they have no soul or something. Its just not as scary when its CGI and the same goes reverse, animals wouldn’t be as awesome if they were CGI. Thats why those 90’s animal movies were always awesome because they were real. Dr. Dolittle and his animal companions were all real. Fucking Homeward Bound was awesome and if any of those animals were CGI, I frankly wouldn’t give a fuck if they made it home. When I see a dog i want to be reminded of my dog. When I see a CGI animal they’re just pixels on the screen.

The Ugly Orange
Blog at WordPress.com.