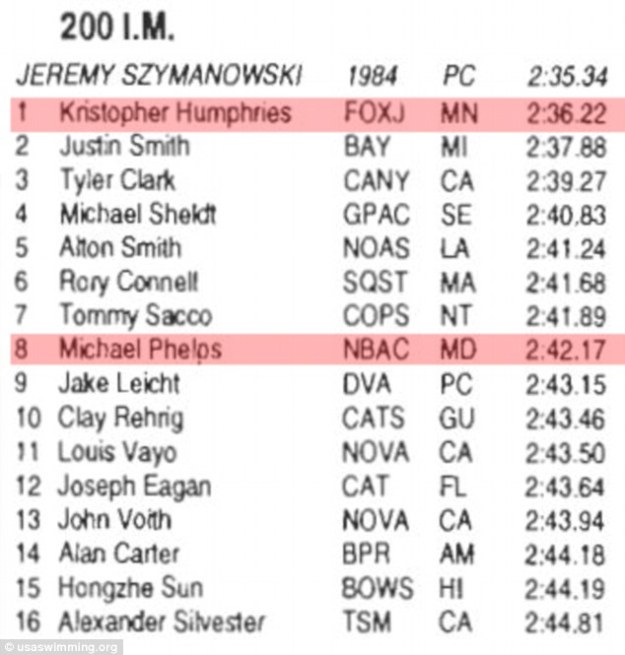 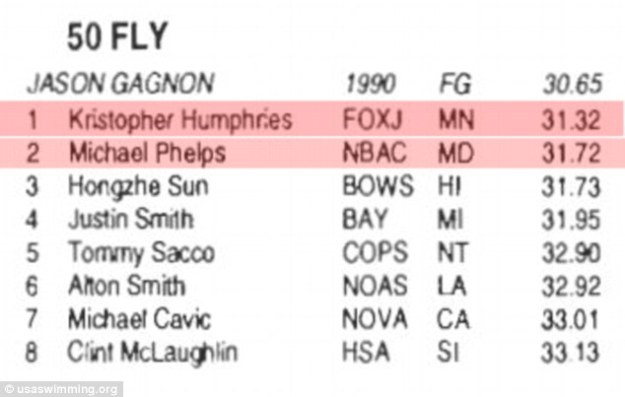 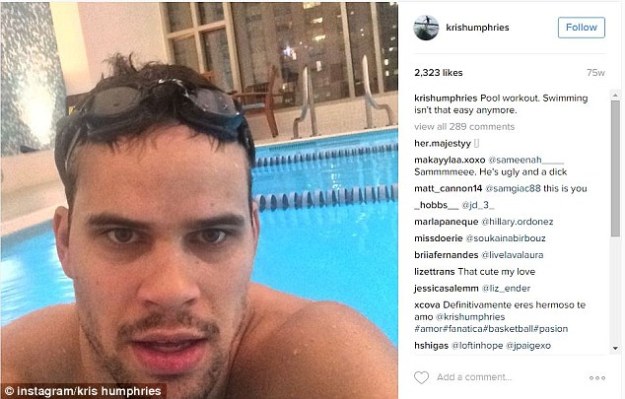 Daily Mail- While Michael Phelps is now considered the ‘greatest of all time’ with 23 Olympic gold medals, an unlikely competitor once bested him in the pool. More than two decades ago, basketball player Kris Humphries was a talented swimmer who beat Phelps – and 12-time Olympic medalist Ryan Lochte – in numerous events registered by USA Swimming. The Atlanta Hawks forward eventually quit the sport to pursue basketball, but Humphries still holds several records among his age group in Minnesota. In 1995, when Humphries was just 10 years old, the basketball player who later shot to fame after his brief marriage to Kim Kardashian out-swam Phelps in six events, NBA.com reported. Humphries beat the Olympian by nearly six seconds in the 200-meter individual medley, an event Phelps has dominated in the last four Olympics. While Phelps recorded the fastest 100-meter butterfly for his age group in the US that year, he lost to Humphries in the 100-meter freestyle by nearly four seconds. Humphries was an adept sprinter, posting faster times than Phelps in the 50-meter freestyle, butterfly, backstroke, and breaststroke. He also set two records in his age bracket in the 50-meter and 100-meter freestyle events, that lasted for more than 18 years. Ryan Lochte, Phelps’ best-known rival, also appears in the 1995 ledgers, losing out to Humphries in the 50-meter backstroke and 50-meter freestyle. But his love of the sport didn’t seem to last, and Humphries told People magazine in 2003: ‘I was so good at a young age that I got a little burnt out.’ I also grew up in the Michael Jordan era. For me, I watched [basketball] and saw it as a challenge. ‘It’s hard to stay focused on something when you have a ton of success at a young age, so I picked up basketball a little later and rolled with that.’The basketball player seems to enjoy the occasional dip in the pool, but lamented on Instagram last year: ‘Pool workout. Swimming isn’t that easy anymore.’

Ahh the question that comes up every 4 years. Would you rather be a pro athletes that play a real sport or one of these Olympic athletes that gets to compete for their country and try to win a gold medal. Now they say Michael Phelps was born with a perfect swimmers body but in hindsight, you think Kris Humphries would go back and choose swimming over Basketball? I mean the problem is out of the thousands of athletes competing at the Olympics probably 95% of them are just scrubs that work at subways making sandwiches and only bask in the glory for 2 weeks every 4 years. Now on one hand you’re Kris Humphries. Journey men NBA player who probably has no real notoriety if it wasn’t for the fact that he had sex with Kim Kardashian. That’s either a good or bad thing depending on if you think Kim K is hot or not but in the end is fucking around with a net worth of $18 mil. Sounds pretty decent being a career NBA player with a nice amount of pocket change. But then you have Michael Phelps who’s the most decorated Olympian with 23 gold medals and FIFTY-FIVE million dollars for swimming. I mean I know there’s a good chance with the way NBA salary caps and TV deals that there could of been a chance that Humphries got around that number but the fact of the matter is, he’s no Lebron or cracking anything near the top 10 highest paid ever. On a more comparable scale, Humphries beat Lochte too who has around $3 Million. Definitely would rather be Humphries now than Ryan Lochte getting robbed at gun point in Rio with only $3 mil to show for it. But he’s got to at least somewhere in the back of his mind probably think if he just stuck with it, he could be in Phelps shoes with nearly 30 gold medals hanging from his neck, $55 million, and free from all the controversy that was Kim Kardashian.