Everyone knows I hate snakes. So obviously I’m not saying I’m turned on right now, but I’m also not not saying I’m turned on right now. Jah feel? This just kinda proves one thing, Women are just devil seductresses. Yea i know, it’s something we kind of already know. If she has a fat enough ass or big enough tits, your judgement gets clouded 100% of the time. I just said i hate snakes. I said it before i clicked on the video. I said it watching the entire video in a trance. I said it after i watched the video. I said it when i watched the video again. And last of all, I said it while sporting at least a half chub the entire time. Maybe the situation would be different if i was in a lap dance stall one on two with her and a snake but all i know is she did naughty sexy stuff with the snake and sure i was a little bit disgusted but i was also turned on enough to probably throw all the money i have at her to make her do more of it. Why? because she knows what she is and knows she can use what she got to make some money off of suckers like me and all these dudes here. And its not just us, you guys reading it too can admit you guys got turned on just a little bit. If it wasn’t when the snake was slithering over her pussy, it was when she was about to deep throat the entire snake. (You think about what she could do to your penis that probably sucks.) 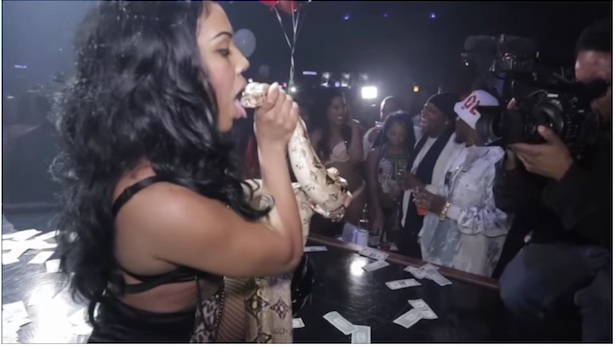