DeathAndTaxes- On Sunday in Fort Greene, Brooklyn, a car lost control and jumped a curb, mowing down three people, killing one of them, a 30-year-old woman.
Strangely, another woman was walking by, munching on a slice of pizza, and the car came to a stop just before hitting her. Then, she casually turned around and walked away, continuing to chow down on her slice.
The whole thing was caught on surveillance footage, obtained by DNAinfo:
It’s something that would make George Costanza proud. You can almost hear the Seinfeld bass riff playing as she wanders off, greedily stuffing pizza in her face.
The driver of the car was arrested for driving without a license. The two other victims are in stable condition. The hungry woman is presumably eating pizza in front of some other terrible tragedy.

Cold as ice. Man I don’t know what it is. I certainly don’t like that someone died in this tragic accident, but I just love how much this chick doesn’t care. I’m not saying its a redeeming quality in a woman. I want to love a women who values life and understands emotions. But something about her just brushing off a SUV jumping a curb and taking out 3 people and continuing about her day just gets me to intrigued. I’m not so much as disgusted, as I just want to get into her mind state to the point and figure out everything about her and her thought process. Has she just seen so much shit in her life that a death occurring right in front of her eyes doesn’t even phase her? Is she blind because it kinda looks like she’s wearing sunglasses at night? Maybe she’s intoxicated? Where’s that Pizza from? Does she do toppings with it? I need to know!

And look all the people giving her shit, what could she honestly do? Something tells me she doesn’t practice medicine as a profession so its not like she could really save their life right? Most she could do is dial 911 and I’m assuming others were there to do that so calling twice really doesn’t solve anything. Maybe her brain processed all of this in a millisecond and came to the obvious conclusion to finish off her slice and chill at home? Listen people die all the time. Its tragic. But you know what, its 2015 and frankly its a little refreshing to see a person not interfering at all, and thus not being an asshole who tries to record everything. I mean don’t get me wrong, If no one recorded shit on the streets this blog would be garbage, but deep down we all hate the assholes with cameras in your face or getting in your way because they want to record shit from their iPhone in the hopes of making things go viral. You’re on the highway and people are rubbernecking slowing down traffic to try to record the quick video of a wreck. People pulling out their cameras at every arrest in hopes of catching the cops abuse their power. Well fuck all that. This lady just doesn’t give a fuck about any of that and knows she just has to take care of number 1 and what number 1 wants is to finish the pizza. Love the move.

P.s- That would be some grand irony shit right? The woman that cares so much about not being involved or care to go viral that when she gets caught up in this accident, she goes viral about how much she doesn’t care. Irony.

OrlandoWeekly– The popular pizza joint Lazy Moon Pizza, known for delicious pizzas larger than an infant, will soon open a new location in the Mills 50 area.
As first reported by the Bungalower, the pizzaria will occupy a 5,000 square foot space in the bottom floor of the former Cruises Only/Euro Living building on Colonial Drive.
Not many details are currently available, but we’re hoping this move will also include Lazy Moon’s Boxcar Willy special, which involves a slice of cheese and a PBR for $5.
According to the Bungalower, a butcher and delicatessen called Orlando Meats will also open on the first floor.

When I left O-town there was two sure fire regrets I had. 1) was not trying the gobbler at Wawa, last time I was up there I crushed 3 of them and they are fucking legit. 2) was not getting enough Lazy Moon when I was there. Because there’s nothing better than massive slices of pizza the size of a full grown toddler on any occasion. Any its not just a novelty either. If it was that I’d be the first to call them out on that, but shits actually legit pizza. A long night of drinking and one slice can magically fill you up and cure the worst hangovers. Seriously there’s not a lot to Orlando to like outside of the Disney area and UCF itself and that place might be a breeding ground for hate mongering Nazi’s. Well Lazy Moon is definitely a staple to Orlando and the fact that its gonna be 10 minutes outside of downtown means you can get drunk, load up on pizza and beer at Lazy Moon and maybe even try to finger a Vietnamese girl wandering on Mills in Viet town if you can’t close a deal with anything from the bars and clubs. It’s a blessing to Orlando. 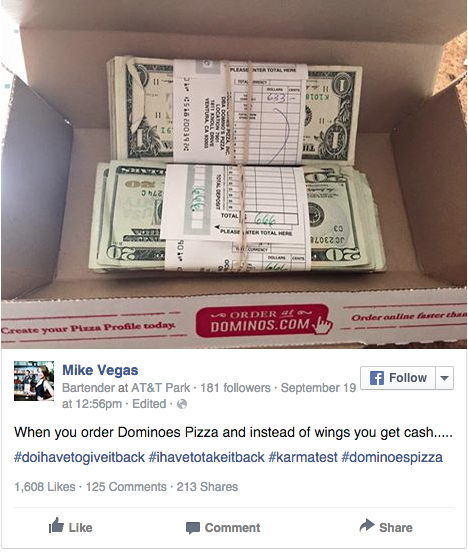 HP- Hiding nearly $1,300 in cash in a box marked “chicken wings” might seem like a great way to safely get money to the bank, but only if you don’t accidentally deliver it to a customer.
A Domino’s in Berkeley, California, made just such a delivery on Friday, and the customer didn’t even open the box right away.
Mike Vegas, a bartender at AT&T Park in San Francisco, told NBC Bay Area he thought he was going to have the night off so he ordered some pizza and wings. But when he got called into work, he stuck the box of wings in the fridge unopened.
“I got off work really late, and when I came back home I found the cash in the delivery box — a refrigerated deposit,” Vegas told the station. “I was rubbing my eyes at 5 a.m., laughing at myself.”
Vegas said the driver had called looking for the missing money, but since he had been at work, he ignored the calls.
Vegas posted an image on Facebook showing two stacks of bills — one containing $666, the other $633:
Vegas seemed inclined to return the money from the beginning, using the hashtag #karmatest.
“Of course there’s a long list of people arguing you should keep it, you shouldn’t keep it, you should keep it, you shouldn’t keep it,” he told KGO, the local ABC station. “I wanted to keep it, believe me. But I can’t, I can’t do that.”
Some of Vegas’ friends also worried that the driver would lose his job over the botched delivery.
“Driver is safe and keeps his job, money is back at Dominoes, I was offered free pizza for a year,” Vegas wrote in an update. “Bonus- karma should drop by my place soon.”
Domino’s was also happy they got their dough back.
“Thank you so much for this,” general manager Zia Mumtaz said when Vegas returned the cash, according to KGO. “Honest people are hard to find these days.”

Listen im all high spirited knowing that theirs good people in the world. As a chinese food delivery driver i know how much it sucks when you deliver the wrong order, your boss yells at you, you get to the house the person yells at you, you go to the house the food was originally intended for and then they yell at you and you’re left with an empty tank and no tips. But im not blaming the pizza boy one bit. Why the fuck would a manager label a box filled with cold card cash “Chicken wings” and why the fuck would you put it in a chicken wing container??? And you think its to fool criminals from stealing it, you’re crazy.  Between the 3 things that was and could have been in the box, Money, chicken wings, or pizza, all three of them are worth stealing. Not even as a criminal or a homeless guy. Like if i saw free wings laying around i probably would take them if they didn’t look gross. And if they look like 2 cold stacks of cash in crisp bills, yea then i definitely would steal it. If i were Mike Vegas over here i would make sure i order free pizza from Dominos as much as i fucking can because if their operation runs so poorly as to putting money in a box labeled chicken wings, they deserve to loose that cash.

p.s- Mike Vegas is kind of crazy for not digging into those wings like right away, I dont think i make it all the way back to the kitchen when i order wings.

Source- A sleepy bear cub was found napping in a pizza restaurant in Colorado Springs after it spent the afternoon wandering around the town.
The discovery is the latest in a series of bear incidents in the town.
The cub was spotted wandering the streets of the town and workers think he followed his nose to the restaurant before bedding down on a top shelf.

That bear could’ve eaten the Pizza parlors entire stock of cheese and pepperoni and you still couldn’t be mad because that bears cute as fuck. Luckily for them i dont think the bear took anything, but if it did you know you wouldn’t be mad. Shit i almost want to buy it some pizza and play with it. But to get to the main point, when ever you’re at work sometimes you want that right place to cuddle up and take a quick little cat nap. Like in The Office where Darryl tells Jim and Pam about this secret napping spot in the warehouse, well this bear just found a sweet spot on a shelf rack where you got pizza boxes blocking out the lights and can take a nice 30 minute nap probably. Awesome too because im sure only a bear cub can fit in there because you don’t want any other people taking your spot. Shit its 10 am and i could use one of those naps right about now.