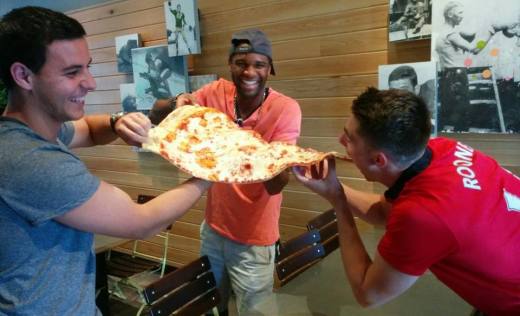 OrlandoWeekly– The popular pizza joint Lazy Moon Pizza, known for delicious pizzas larger than an infant, will soon open a new location in the Mills 50 area.
As first reported by the Bungalower, the pizzaria will occupy a 5,000 square foot space in the bottom floor of the former Cruises Only/Euro Living building on Colonial Drive.
Not many details are currently available, but we’re hoping this move will also include Lazy Moon’s Boxcar Willy special, which involves a slice of cheese and a PBR for $5.
According to the Bungalower, a butcher and delicatessen called Orlando Meats will also open on the first floor.

When I left O-town there was two sure fire regrets I had. 1) was not trying the gobbler at Wawa, last time I was up there I crushed 3 of them and they are fucking legit. 2) was not getting enough Lazy Moon when I was there. Because there’s nothing better than massive slices of pizza the size of a full grown toddler on any occasion. Any its not just a novelty either. If it was that I’d be the first to call them out on that, but shits actually legit pizza. A long night of drinking and one slice can magically fill you up and cure the worst hangovers. Seriously there’s not a lot to Orlando to like outside of the Disney area and UCF itself and that place might be a breeding ground for hate mongering Nazi’s. Well Lazy Moon is definitely a staple to Orlando and the fact that its gonna be 10 minutes outside of downtown means you can get drunk, load up on pizza and beer at Lazy Moon and maybe even try to finger a Vietnamese girl wandering on Mills in Viet town if you can’t close a deal with anything from the bars and clubs. It’s a blessing to Orlando.