VIDEO LINK HERE IF YOU WANT TO WATCH A VIDEO OF A DUDE STROKING IT FOR 25 SECONDS AND HIM LYING ABOUT IT FOR ANOTHER 20 SECONDS.

Just a guy maximizing his work out to achieve the best results. Engage the core and maintain flexibility. No need to limit the workout just to the arms when when you can air hump your way into the pussy of the hottest chick at the muscle factory. 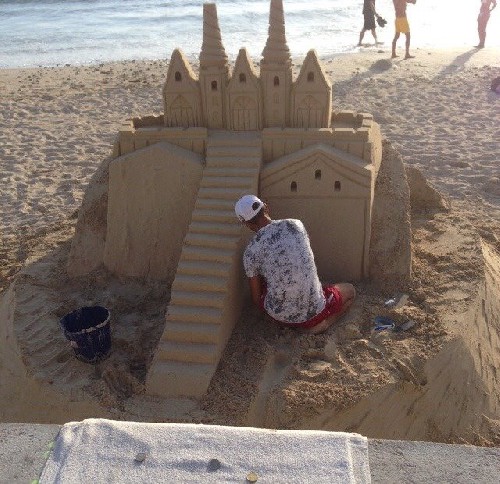 Look we all get it. When you’re drunk sometimes you make a mistake. Bump a car drunk driving back home, get into a fight because you drunkenly bump into someone. It happens. Things just go 0 to 100 outta no where sometimes. But fuck these assholes. I don’t even think they’re drunk, i just saw one guy sipping a can so assumed but either way fuck these guys. Yea i think that a grown man building a sandcastle is weird but if he’s working on his sand castle you’re an ass if you just run through it with your buddies like a battering ram ruining his life’s work. The guys dedicated to that fucking sandcastle. I mean he’s building that thing in the middle of the night. Guy doesn’t have much in life going on right now besides that sandcastle and you’re just being a dick about it knocking out the back side wall and flanking left tower. And thats where i gotta respect this sand castle guy. Dude i think stayed up through the night just rebuilding his sandcastle not throwing a fit or anything. Shit like this probably happens often in the sand castle game. Guy just puts his nose to the grindstone and build it back up.

Legless Assassin Can’t Get His Shot Off
And is tackled after his attempted killing ….. you cant see such a thing in any other part of the world. Only in Turkey. such a fucked up country
Read more at http://www.liveleak.com/view?i=354_1439677517#flEBgmbRWAZP9Dvg.99

This could’ve been a brilliant move who ever put the hit out. Its kinda like in Smokin Ace’s if anyone seen that movie, Lazlo Soot the professional hit man. Dude just takes on a bunch of disguises and at one point he’s this black homeless looking dude with dreads in a wheel chair and lo and behold he’s actually an assassin with duel machine guns pumping lead into a group of people while he’s actually white with working legs. Its unsuspecting.

This guy however is the opposite of being a good assassin. If he were a good assassin he would not have done the following 1.) Not been just casually strolling down the street with a pistol in hand with his crutch. Amateur hour. You gotta keep that shit tucked somewhere and look all cool pulling it out. 2.) he would’ve used a gun that actually works. Dude pointed it at his mark for like 10 mississippi’s before trying to rack the slide from a jam or something. You can literally kill 10 people in 10 seconds probably even more if you’re skilled but he killed zero. Above all gotta make sure you have a working gun during a hit. Day 1 stuff. 3.) You need working legs. Plain and simple. Get robot legs or those blade runner contraptions. anything. If all had gone correct he couldn’t even run away. Guy would have to hobble away. In his situation if he had another leg i feel like things would’ve just worked. Gun probably wouldn’t jam, mark would’ve been killed, He would’ve gone to his safe spot counting his turkish lira. But instead he’s short a wheel, picked a profession that he’s incapable of doing well and from that decision also picked a gun that doesn’t work. I want to hate this guy for being an assassin but im more embarassed for him. Got tackled on the job and it all started from a series of bad decisions that began with missing one leg….Also living in Turkey, thats also a bad move.