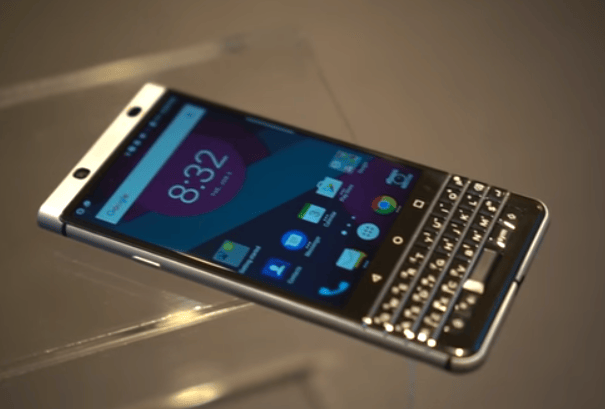 Unilad- What was once the integral appendage to any self-respecting businessman’s hand, became the trendy addiction of 16-year-olds… so Blackberry had to adapt from their four apps and use Android so kids could play fruit ninja.
Just when you thought you had moved on to a sophisticated iPhone 7 and were ready to leave the awesome full QWERTY keyboard for good, TCL go and bring out a brand new Blackberry ‘Mercury’ (unconfirmed name).
The Chinese tech giant TCL is planning to reinvigorate the brand with a focus on security, productivity and reliability – but they’re keeping the old QWERTY keyboard (they couldn’t get rid of that).
The Android handset, which claims to offer ‘the most complete end-to-end smartphone security available on Android’, will be previewed at the Consumer Electronics Show (CES) this weekend, Mashable reports.Due to Blackberry’s dwindling success in recent years, market researchers think the new phone could be a suicide mission for TCL.
I, on the other hand, have no doubt that everyone’s inner Blackberry-obsessed teenager will awaken at the sight of the keyboard.

You know the scene in Pearl Harbor where Kate Beckinsale thinks Ben Afflecks dead and so Josh Hartnett comes in to console her and the two end up falling in love with each other but then like a phoenix from the ashes Ben Affleck comes back for his love one? Well now I fully understand what she was going through because I’m emotional torn to shit. If you don’t know by now I’m one of the few left on this planet that still uses a Blackberry. Hubris leaking out my ears for my Blackberry. Always assumed all the big wigs used them. I remember when I Ari Gold use one I was hooked and thought to myself maybe if i had one i could sign a bunch of movie stars and fire people like they mean nothing. Just ruthless business. Well as the world turns and technology advances my berry is clinging on the last remains of it’s useful life. Got an outdated version of Instagram, Facebook that loads up in a web browser and Twitter that takes 2 hours to refresh. Half my family around the world couldn’t wish me a Happy New Year because my Whats app app is outdated and no longer functioning past New Years on midnight. Can’t hail an Uber in a pinch if i needed too or fire off dick pic snaps on Snapchat. All this time I’ve been keeping up with the world with a blackberry in one hand and an iPod touch in the other in hopes that that was enough.

It came to my realization like last week that this couldn’t keep up and that I needed to change things. It was finally time I was going to give up and convert fully to an iPhone. One year to wait in hopes of getting the new iPhone 8 because all the other blackberry models just didn’t do it for me. Then outta no where….Just when I thought I was out, they pull me back in. I always said if there was a version of Blackberry I liked, I’d ride with them to the death. Should I concede? I’m so use to the iPod it might as well be an iPhone. I don’t know if I could honestly make a decision between the two to the point where I wish both phones went on a secret suicide mission to bomb hiroshima in a couple of B-25 bombers and which ever comes back is the one i chose to love and spend the rest of my life with even though I’m carrying the child of the fallen smartphone named after itself.