Welp, Yesterday was fun huh? Losing 27-14 to a division rival. Start the morning completely miserable because all of a sudden all the hype going into the season about how this is a different Dolphins team is almost entirely diminished after the loss across the pond.  Lets start with the obvious.

When I saw the video of Philbin dancing on stage singing that people should worry about the Dolphin coming to town i was almost sure They were gonna win almost all the away games. That you don’t just sing and dance to that with a baller suit and a top hat on with the utmost confidence for no reason. Well now Im thinking its more of a “Let me try to get the cool popular black kids to like me so they don’t give me a wedgie and a swirly in the locker room” type of move. Seriously I was almost getting worried his plain vanilla ass was gonna be stranded and marooned in London after yesterday. He can sing and dance all he wants and take the team to go see NWA biopics but if you suck at being a head coach and lead the team into another abysmal season your ass should get fired. 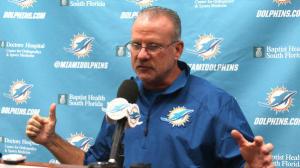 Kevin Coyle. Umass Amherst alum. He doesn’t know football. Defense has just looked worse and worse through the seasons. should definitely leave his ass in London.

Its time i think we start looking past Tannehill. Don’t hate the guy but he’s constantly on the boarder of being past mediocre but never seems to move past it and become a real franchise QB. Why? maybe because that boarder is an impenetrable roof that is his QB abilities. Maybe he can one day take over a game and actually lead his team to a win and playoffs but as of right now, with the way the offense looked, he no longer seems like he’s teetering on that line of being mediocre to franchise. 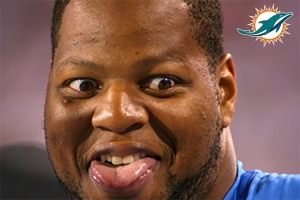 The big bad Ndamukong Suh. 114 million dollar bust. At first i thought his ass would be melting in the Florida sun and won’t accomplish a thing. But then i said to my self, black people don’t like the snow so maybe he’ll like playing in Florida. But then its 4 weeks later and he seems like a bust. No doubt it has to do with Coyle and confusing defense schemes but I also don’t like scum players and Suh is the top of the list. Oh and he might’ve tried to kick Fitzpatricks head off. Yea it looks accidental, but thats what happens when you have a laundry list of dirty penalties as your reputation.

So there you have it Dolphins stink in Florida, they stink in America, and they really stink in London. Hey NFL, really good job letting Florida teams being an ambassador of the sport. Dolphins now 1-2 in Wembley. and 1-5 for Florida teams. Maybe if we played in Spain we can rally with the spirits of Ponce De Leon but as for now we we slowly and depressingly march onward to Tennessee to face the Titans who has a rookie QB who I can absolutely see beating us. Hopefully though, someone’s on the chopping block this week (Kevin Coyle, Joe Philbin maybe but I kinda like him still from his on stage performance and i need that Philbin to blossom eventually.)

Side note- I wonder how Ponce De Leon would do a DC or HC? Having a 16th century Spanish Conquistador as a head coach or defensive coordinator can’t be that much worse than Kevin Coyle