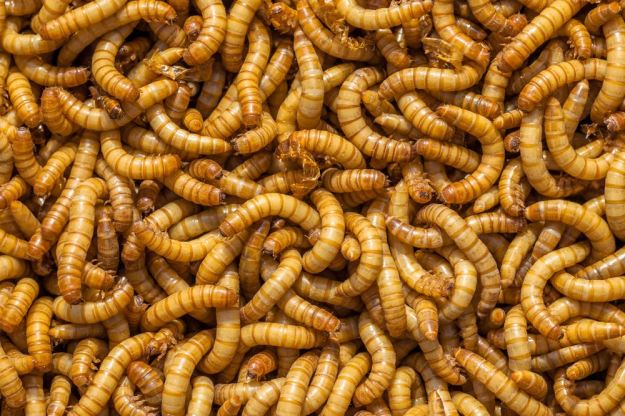 (CNN)- Plastic, long considered nonbiodegradable and one of the biggest contributors to global pollution, might have met its match: The small, brownish, squirmy mealworm.
Researchers have learned that the mealworm can live on a diet of Styrofoam and other types of plastic.
Inside the mealworm’s gut are microorganisms that are able to biodegrade polyethylene, a common form of plastic, according to new studies published in Environmental Science and Technology by co-authors Professor Jun Yang and his doctorate student Yu Yang of Beihang University, and Stanford University engineer Wei-Min Wu.
“The findings are revolutionary. This is one of the biggest breakthroughs in environmental science in the past 10 years,” Wu said in an interview with CNN.
He added that the findings could help solve the plastic pollution problem affecting the world.
The research documented 100 mealworms that consumed 34 to 39 milligrams of Styrofoam, which is about the weight of a pill, every day. Scientists also paid attention to the mealworms’ overall health and saw larvae that ate a diet subsisting strictly of Styrofoam were as healthy as mealworms eating a normal diet of bran.
Researchers found that mealworms transformed the plastic they ate into carbon dioxide, worm biomass and biodegradable waste. This waste seemed safe to use in soil for plants and even crops, the studies said.
Being able to find insects that can safely degrade plastic is critical to potential pollution management because other insects such as cockroaches can also consume plastic, but they have not shown biodegradation, Wu said.

Fuck. Have you guys ever just pounded your fist on the desk because sometimes your ideas are so genius and revolutionary that the modern world wont understand yet someone else practically takes credit for your ideas because you’re limited by your resources and shit? Probably not but thats why you guys come to the Ugly Orange, to hear my thoughts. But back to the topic at hand, i might not be able to sleep now after this. See a few years ago one lonely night, i spent like 5 hours researching farming stuff. Why? Because Im a worldly fellow who enjoys nature and shit and learning new things here and there. Towards the 3 am hour i stumbled across this thing called worm farms. From there I’ve BEEN on the worm train. For those of you who don’t know red worms can pretty much eat anything natural. Paper stuff and like apple cores and all that stuff we throw away and in the end it shits out the worlds greatest fertilizer apparently. Then my brain started cooking. Basically if i had like a billion dollars my plan would be to start a landfill in Africa. I wanted to team up with my buddy in Nigeria and basically import waste over there, and just let the worms eat all the stuff that makes them do their thing. And basically i would have the dopest fertilizer known to man and I would sell that shit all over Africa. Re-fertilize the land and shit and get medals and awards for pretty much saving a starving nation and i tell that to check to try to bed em. Shits a billion dollar idea. My brain’s to much for the U.S. Dollar, I need funds from all over the place.

Well shit now that i know these little meal worms can eat plastics and Styrofoam, i can mix them into the product line and get rid of all those loose pieces of plastic that hippies are always talking about how they pollute the waters and trap animals in. I need to save that glowing sea turtle i blogged about earlier this week because word is bond.  Look i don’t have the mechanical knowledge to create some giant revolutionary million dollar waste compactor thats suppose to magically save the world, what i have is the ability to recognize when i see something special. Its like when i said I knew Kayne was gonna be big before he was signed or when I decided to be endorsed by Monster with out them knowing and then their return on stocks sky rocketed past the moon. Well I saw that hope for man kind wasn’t some new invention, it was these tiny fucking worms that can save the world.

Happy, guys? You get a glimpse into the genius that is my brain. I bet one of you out there is gonna take another one of my moments of sheer brilliance and make news from it and here i am blogging just to keep you guys sane. You luck sum’bitches.