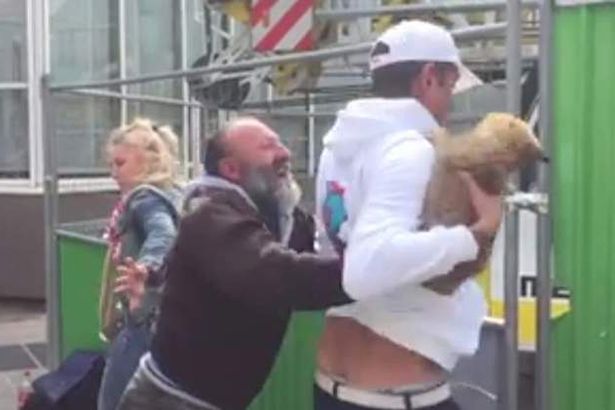 Mirror- This is the heartbreaking moment a homeless man weeps while his beloved dog is taken away by animal rights activists.
The video shows three activists taking away the dog in central Paris in front of shocked onlookers.
And since emerging online the video has sparked outrage as viewers were moved by the homeless man’s emotional response.
He can be seen crying while a woman is heard telling the activists: “You don’t have the right to do this!”
The man who filmed the footage over the weekend, Nghi Le Duc, said the activists from Cause Animale Nord acted “violently” and “mercilessly”. He added that they acted “without pity”.
“I was shocked when I saw this scene in the streets of Paris,” he said. However Cause Animale Nord has defended its actions, claiming the homeless man had drugged the dog – saying that the puppy had dilated pupils.
They also added that the dog was not vaccinated or chipped, which is illegal in France.
Since the video emerged online a petition has been set up and signed by 60,000 people calling for the actions of the charity to be probed.Petitioners claim that the activists went “too far”.
There are also calls for the charity to prove that the animal had been drugged.
The petition added: “Nowhere [in the group’s rules] is it stated that they have the right to remove without notice any animal or that is what they did by attacking a homeless violently to take his pet [a puppy].”

Theres never many reason for me to side with a bum, but fuck this group for ripping the only thing this homeless dude has in his life. Everyone by now should know im a dog guy because to be anything is else crazy and im not crazy. So if i were to one day lose all the money i have in my bank account and be forced to live among the vagrants and derelicts of the city, you best believe the one person by my side would be my dog. I raised that mother fucker since like birth. Dude gets equal amounts of food as I. We’re one in the same. If you try to take him away from me then as a bum you’re probably gonna get bit by me. Might not have the nutrition and strength to chase and throw punches but if i get close enough i will bite you cause that’s what bums do.  First off this guy from the Cause Animale Nord looks like he’s ready to watch a boy band and to go along with his nice nails, he wants a nice small dog so he stole the little pup. Not saying any of that has a right or wrong but he doesn’t look like he’s serious about the well fare of the animal. Second, dilated pupils? Thats just a dog being a dog, bright wide eyes and bushy tail because dogs are always happy. The dude was loyal and stuck by this bums side through the good times and the bad. To think it was drugged? Homeless people dont let other people use their drugs so i doubt he would let his dog use his drugs that he sucked dick and begged for. Third, dogs are tough motherfuckers, you think stray dogs have like fancy ass medical bills they pay off? No. They roam the streets eating whatever and build up an immune system that can fight off AIDS probably. If you really cared you would pay for this guys dog vaccines and not just straight up kidnap the pooch. This isn’t about me siding with a bum here. Its about fighting for the bond between man and canine. Anyone that ruins that friendship is a terrorist in my mind and i wont stand for it!