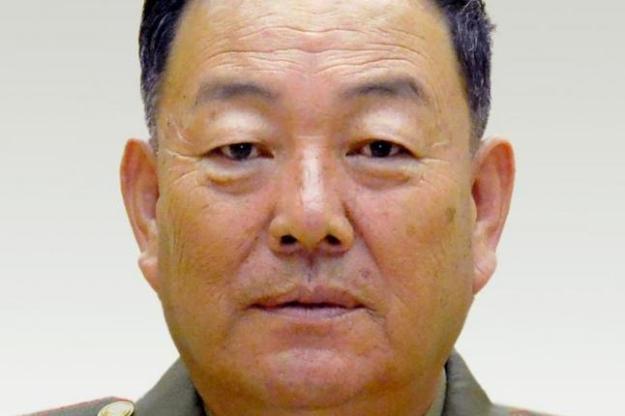 SEOUL, June 15 (UPI) — North Korea dispatched official bulletins announcing the execution of Hyon Yong Chol for insubordination, South Korean media reported Monday.
South Korean news network YTN reported the news was sent from North Korean embassies in China and other locations to the host governments, including Beijing.
Kim Jong Un was reported to have dismissed Defense Minister Hyon after being outraged by Hyon’s “disregard” for the North Korean leader during a meeting, South Korean newspaper Chosun Ilbo reported.
Hyon’s purge also has been followed by the forced disappearances of Jang Sung, an official at the Ministry of the People’s Armed Forces, and other top-ranking personnel.
An unnamed source in China said the bulletin confirmed Hyon was executed for insubordination and disobeying the party leadership.
Kim Jong Un’s “Military-First” policy holds consequences for those who do not follow Kim’s orders – including execution.
The South Korean newspaper’s source said Hyon’s napping during a meeting was deemed treasonous to Kim, who regarded displays of boredom during meetings, such as napping or daydreaming, as an offense worse than voicing opposition before the North Korean leader.

R.I.P. bro but Thank God we don’t live in North Korea. This blog would have me executed if it were so. I bet just a yawn would have Kim Jong’s blood boiling in rage alone. Napping in a meeting? You’re so fucking dead. Now in America getting reamed out by you boss for napping is pretty fucking embarrassing as it is. I picture some Ari Gold type calling you into his office and just berating you like your career means nothing. Threatening you job letting you know you’re 2 strikes away from getting fired and then you gotta walk back to your desk, people sticking their head above the cubicle to watch you walk back to you’re desk with your head down. Even if its only a little hurt, you’re pride gets a little ruined. Well at least with Kim Jongs way, you just die right after. Is it a little severe? Yeaa i guess. But no one wants to put up with a co worker ragging on you, let alone dealing with an official nationwide bulletin announcing your execution. It would just suck putting up with that.