Business Insider– For cats, grooming by licking each other is an integral part of social bonding. As much as some cat owners might want to take part of that ritual, they won’t be successful without a handful of cat fur stuck in their teeth. A Kickstarter campaign, LICKI Brush, launched a product which enables its users to lick and groom their cat as much as they want.

This guy in this demonstration video is like staring at the most pathetic thing on earth. Hey @cats, if you think I’m gonna bite down on some mouth guard, ribbed fake tongue that i thought was a sex toy at first, thing and pretend to lick you in order for you to love me even though I have to look after your over all well being by feeding you and shit and paying for you, you can go to hell. If you think this is normal, you’re delusional. Dogs lick them selves too, yet here we are operating independently as two different species not trying to lick one another with some fake tongue thing. But the part that just makes cats so much worse isn’t that dogs just love people naturally, its that if my dog asked me to lick him with this fake rubber tongue, id do it. Cause i love him and i know he loves me. This cat on the other hand is just fleeting love. Once you realize you’re pathetic and toss that thing in the trash then you can bet your ass your cats gonna go back to expecting food and waiting for the day you drop dead. That’s the difference.

DailyMail- An 18-month-old Alaskan Malamute is winning thousands of fans online after her owner documented her relationship with her favorite toy.
Before Karissa Lerch, 24, from Durham, North Carolina, bought Luca, she had wanted a dog for some time, but couldn’t afford one. Eventually she bought herself a toy wolf from Toys-R-Us to tide her over.
Years later, when she was finally able to get a real dog, Karissa was more than happy to offer her plush companion to the eight-week-old Luca.
‘I passed the stuffed animal down to her and she has kept it by her side at all times ever since,’ Karissa wrote on Reddit.
‘It’s her baby. She carries it around everywhere and always has it with her when she goes to bed.’
The toy dog was originally also named Luca, but as that became confusing, the family renamed the plush pop ‘Mr Wolf’.
According to Karissa, the toy is ‘definitely not dog durable, but [Luca] is super gentle with it.’ 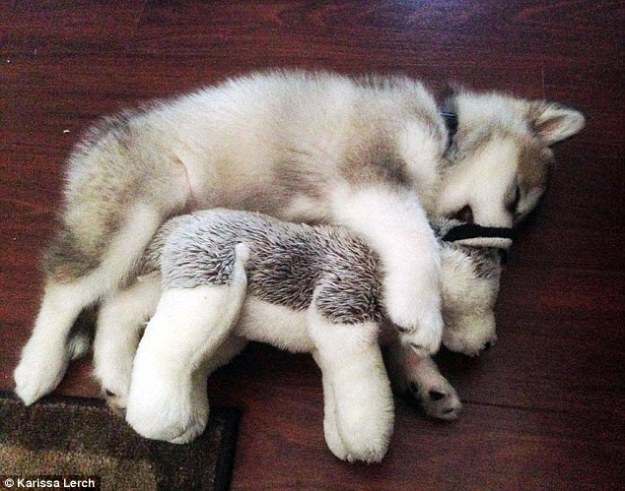 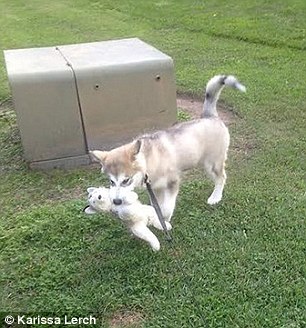 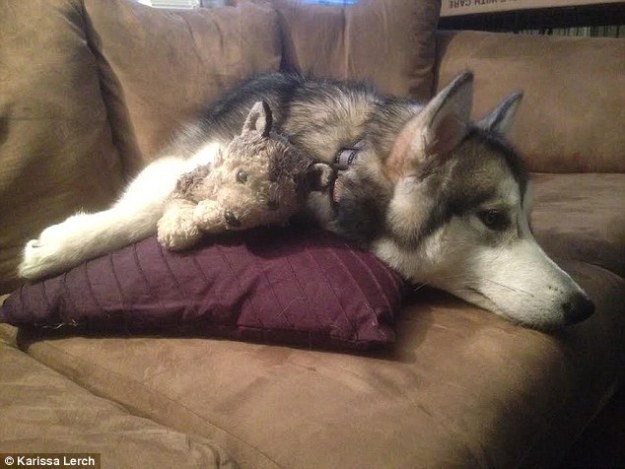 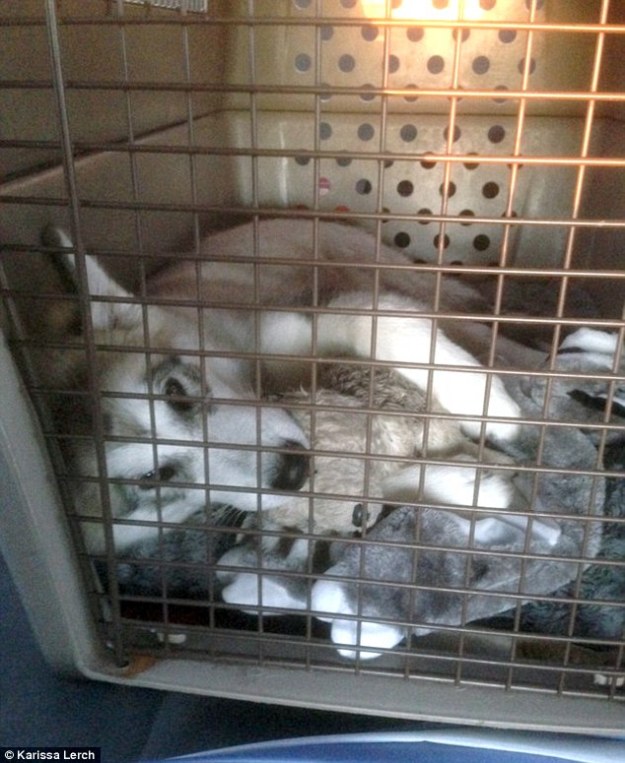 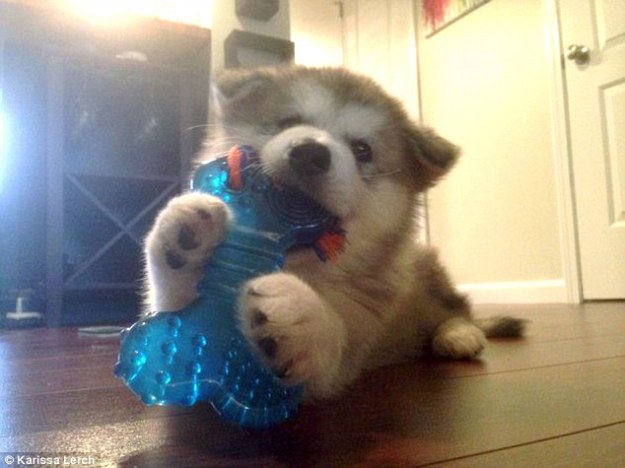 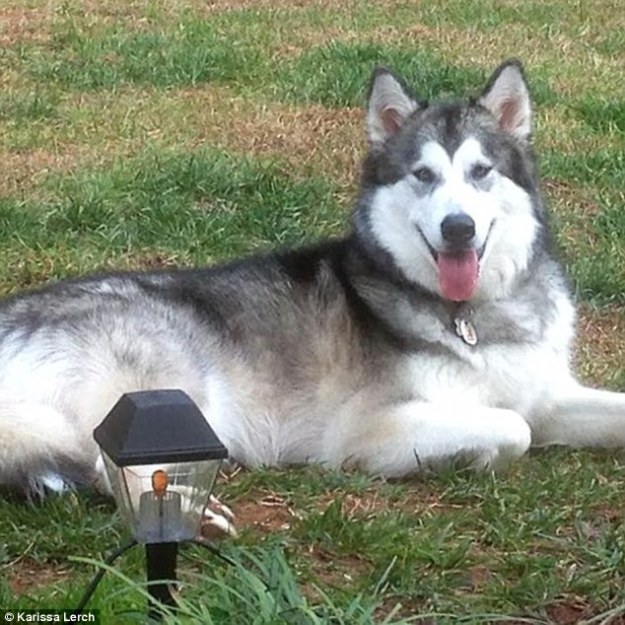 Adorbs. Just all cute as shit and should make girls flutter and go “awwwwwww!!!!!” You know not too long ago my dog did the same with Mr. Zebra, a stuffed toy zebra he use to sleep with untill one day he took a dump in his kennel and ruined it. But that’s not a story that makes chicks uterus go crazy so just stick with the pictures. 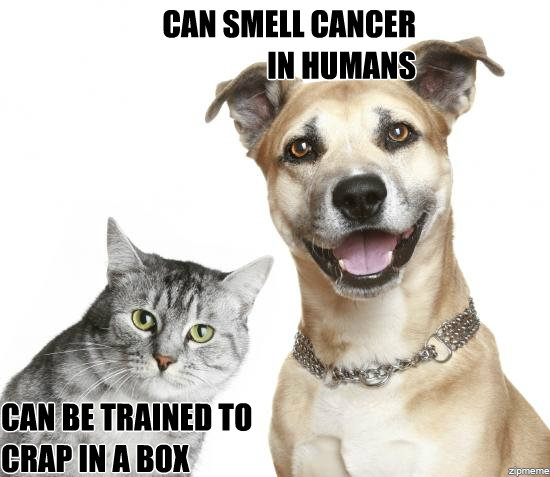 Time-Cats don’t seem to attach to their owners the way dogs do
Your cat doesn’t really need you, new study suggests.
According to a new study published in PLOS One journal, cats show little to no separation anxiety when they’re away from their owners and if/when they decide to stick around their human, it’s because they really want to.
Researchers studied the behavior of 20 cats after being placed in an unfamiliar location with their owner and with a stranger. The results suggest that our feline friends show little to no signs of distress when left alone in strange environments.
“Although our cats were more vocal when the owner rather than the stranger left them with the other individual, we didn’t see any additional evidence to suggest that the bond between a cat and its owner is one of secure attachment,” researcher Daniel Mills, professor of Veterinary Behavioural Medicine at the University of Lincoln’s School of Life Sciences, told the Telegraph.
Animal experts, however, say that this isn’t necessarily a bad thing. Cats don’t need humans to feel safe, and if they’re unhappy they have no qualms with walking out and not looking back. Therefore, when they feel comfortable enough to stay, they really mean it.
The study, too, is small and highly interpretative. Cats display distress and emotion in a variety of different ways — so perhaps your cat is different.

Bonding. Thats the difference between Cats and Dogs. As we said earlier this week, Cats suck. They dont need affection and call me crazy but If i pay for an animal i kinda want it to show some affection thats real. Taking out the trash this morning i couldn’t leave the house for more than 20 feet before my buddy starting wondering where the fuck I went. Its okay buddy! Im gonna be back in 5 seconds! Not cats though. They just think they’re in charge and own shit. Taking dumps in boxes and shit not giving a fuck if you’re dead or alive. Cats are like cold bitches that are always annoying and selfish and just want what they want and then leave you. Just the worst. And again, it comes back to the cat people. Always so overly gross with affection for their “loving”cat always saying “isnt she precious!?!?!” No shes not and scientifically speaking she hates you. My dog, however, who looks cute and likes to huddle up to me and is playful and legit smiles at me and makes me feel like a better man when its thundering and he comes to me for security, thats love.