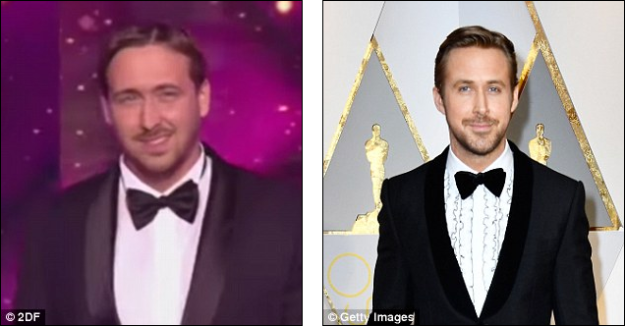 A German film awards ceremony descended into farce when an utterly unconvincing Ryan Gosling ‘lookalike’ waltzed onto the stage to collect a prize for La La Land.

The Goldene Kamera awards usually focuses on actors and directors from its home country, but some A-List names will arrive from Hollywood – and almost always end up walking away with a prize.

But two comedians – Joko Winterscheidt and Klaas Heufer-Umlauf – decided they would throw a spanner in the works. 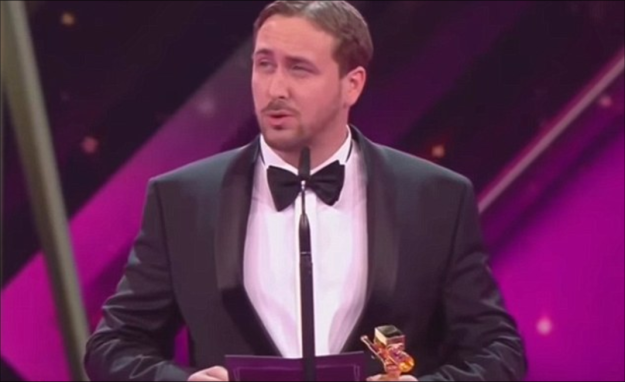 I’m not gonna go on recounting all the times Germany has looked foolish and stupid. There was that whole time where they thought they could beat USA from 1933 to 1945. Well right under that has to be mistaking this guy for Gosling. Don’t get me wrong. If I were drunk and some one bopped me in the back of the head and was feeling concussed I would probably mistake this for Gosling as well. But that’s not the case. You’re at an award ceremony to honor Hot celebrities. Just because you have the same eye color, doesn’t mean you look like a person. Even though your face might have a similar jaw structure. Shit that could be Gosling’s twin brother. The difference between hot celebrities and the common man is they have this indefinable quality that is money. The Suit has to be tailored to a form witting body, hair just right, eyes have to shimmer. The whole nine yards. They have an aura that just glows when your a famous celebrity. This guy is just an offensive brute that just happens to have similar features to Gosling. Well my sneakers have laces, a bottom, and have leather on them but they’re not million dollar Ferragamo for a reason. The entire country of Germany should be embarrassed for taking a bootleg as the real thing.