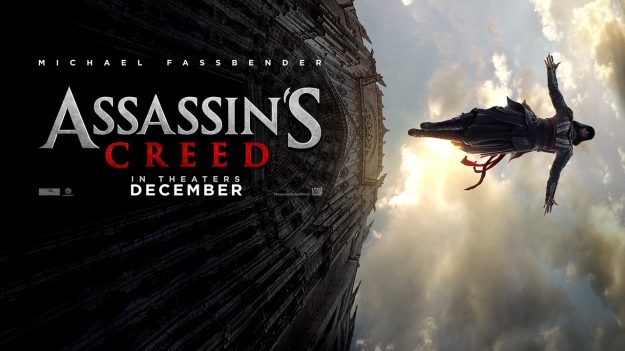 Here we are about to hit Movie awards season with a few days away from the Golden Globes. Thought to myself I had to come with more heat for all of you out there who just need my opinions and dialogue about one of the most enjoyable forms of art and entertainment. So many movies coming out that deserve nominations like La La Land, Manchester by the Sea, I hear Natalie Portman is good in Jackie. So what do I do? I decide to watch the video game turned movie Assassin’s Creed.

Now I’m not a big video game guy which means I’m even less of a video game movie guy but i still recognized that Assassin’s Creed was a video game all the kids talked about on the school yard. The movie, however, stunk. Probably not as bad as i think but I just didn’t care about it. Kind of bored watching it somehow even though people are jumping around on screen and killing people but just not my cup of tea. Maybe if i was still in high school in 2006 when the parkour Youtube craze hit the internet to coincide with the movie I would think it’s cool but as a late 20’s guy who has to deal with the real world and shit, It’s corny and only okay. The acting I’m sure was fine, it’s purely a story thing for me. For some reason regular high power, high income rich guys are trying to stop “assassin’s” by retrieving some sort of metal orb that is the Apple of Eden that contains a genetic code of free will? and some how that will stop violence? So they’ve been doing that up until modern time by creating some god damn roller coaster machine that plugs into your brain like the matrix and brings up projected images of the past so they can try to find out where the fuck this ancient alien orb is? See what I mean, just sounds crazy and maybe the story line can be explained more by playing a 60 hour video game but I’m pretty sure once you put down your play station controller and take a couple of deep breaths you could see the plot is just a tad bit extreme and you need to either buy into it or not and me personally I didn’t. Overall score is a 6. Parkour is a gimmick and I don’t care for gimmicks but the action scenes are decent just didn’t care for the story though.

The Leap of Faith

Guess this is a huge thing in the game? The people just climb tall building structures just to jump down with their arms spread out like a cross and it’s suppose to be cool or something? I’m sure seeing it hte first time would send blood to the dick just from the pure adrenaline but in the end it’s just them falling down. They intentionally climb tall structures just to jump off them. One part in the film he’s about to jump and the Marion Cotillard character looks like he’s about to achieve the greatest thing in the world. Like how in Zoolander everyone was blown away when he was able to turn left and give the world Magnum which was so marvelous it was able to stop a ninja star in mid air. The difference being that that is an early 2000’s comedy movie and this one is some scifi/fantasy type movie that takes jumping off a clock tower too seriously.

You Know What Would Make Killing Assassins Easier? A Gun 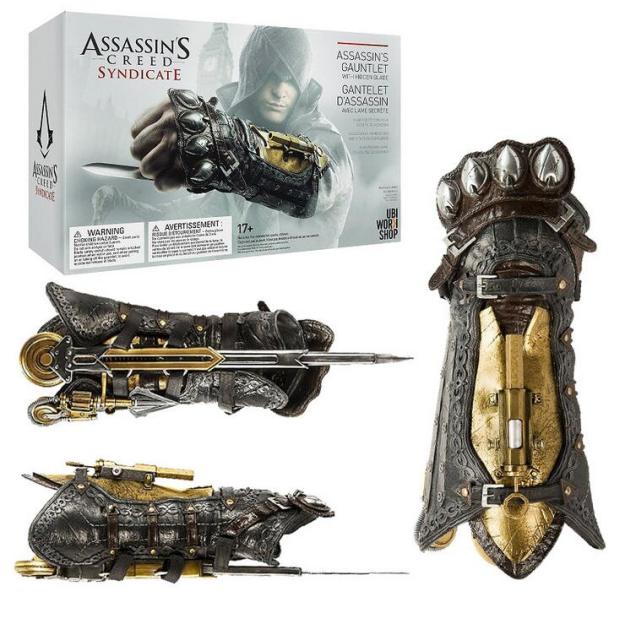 I don’t know what the government approved weapon carrying policy is for large businesses that is in the field of detaining prisoners who have been legally pronounced dead that are actually still alive and are now are being used for scientific research to trigger past memories from ancestors that were apart of a clandestine society of assassins, to study the history of violence and whether or not violence is curable, but I would have a gun. Their room is littered with antiquated weapons that are certainly outdated since the 1500 that they can possibly use however all you do to arm yourself in a room of ex-con’s and murderers is a billy club. Maybe mix in some riot control gear like a shotgun or something that can actually stop a adrenaline filled and fit ninja guy like a .357 magnum. You know something with decent amount of stopping power. Not to mention, their wrist knife thing just seems like an unsafe weapon on their own behalf. The same way I always wondered if in Star Wars anyone accidentally sliced their leg in half twirling a light saber around, well these wrist pop up knives are asking for a nice gash on the fingers. If I had my druthers it would go on top of the wrist so you could be a bad ass like Wolverine and not a risk a 5 inch switch blade shooting through the palms of your hands. 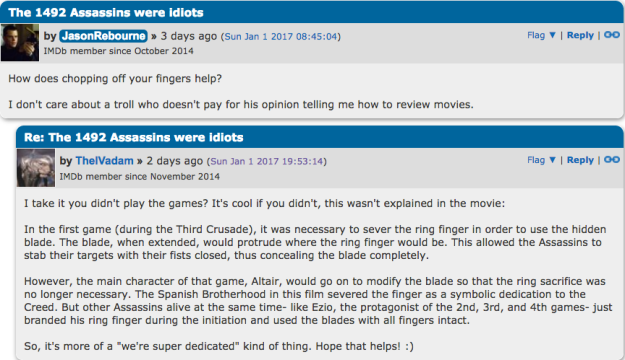 Well i guess that kinda helps their argument to the knife blade thing but i still contend that it should be on top of the hand and can still do the same thing without chopping off a finger. So along with them explaining why they chop off the finger, they should also explain why the wrist palm side is better than back  side.

I was going to get into a dialogue about how they might all be a group of Jews or Israelite from Persia but my brain doesn’t know and is currently incapable of writing that.

2.) People die, knifes and bow and arrows and shit.

This person probably reads the blog.

Hey VVolfySnackrib, you friend probably pops on Shame and fingers her self until her mattress is like a water logged sponge. Should go with her to see more Fassbender flicks and you’d probably get some runoff.

This movie sucked at explaining shit.

No idea how that thing could be so space aged but they should’ve launched it into the sun.

Yo on google it said the movie was 2 hours and 20 minutes long and was just going to give up the 10 dollar ticket. (it was only 2 hours)

I hate this person. Rogue One was awesome. Assassin’s creed was a dump.

I can’t tell if the response is real or trolling. Sounds like something made up very fast and if that’s real then the writers should think about that fact.