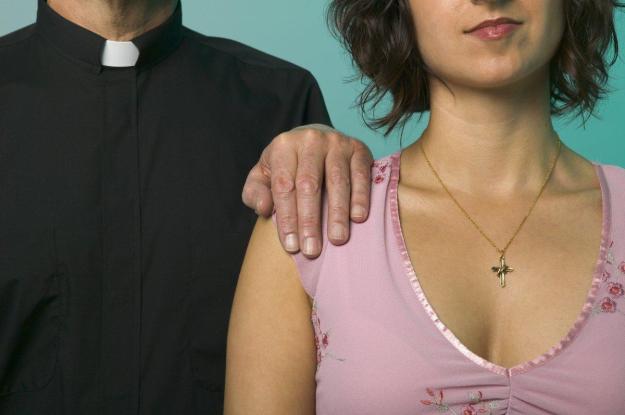 NYDN– An Italian Catholic priest is under investigation for allegedly organizing orgies in his church’s rectory and acting as a pimp for up to 15 women.
Authorities are investigating Father Andrea Contin, a 48-year-old parish priest at the Church of San Lazzaro in Padua, for living off immoral earnings and psychological violence following complaints from three female parishioners, The Times reported.
A variety of sex toys, pornography obscured with covers featuring the names of past popes, and videos reportedly showing orgies taking place on the church premises have been seized by police, according to local media reports.
The 48-year-old priest also allegedly pimped out up to 15 women on wife-swapping websites and enjoyed expensive holidays with his lovers in exotic locations including Croatia, France and Austria. Among his trips abroad was a stop at a naturist and swingers resort in Cap d’Adge, located on the Southern coast of France, according to International Business Times.
A bishop first received complaints about Contin earlier this summer, but church authorities didn’t contact the police so they could first complete their own investigation, the Times reported.
Contin was, however, asked to leave the parish pending a thorough investigation, though “that does not amount to a conviction,” according to a statement from the Diocese of Padua.
One 49-year-old church volunteer during an anonymous interview with local media claimed she had an affair with the priest and confirmed that they had sex in the rectory.
“There were a lot of women hovering around him,” she said. “I didn’t understand that at first, only later.”
Contin has not been arrested, but a prosecutor is reportedly looking into the allegations.

I’ve watched the movie Spotlight roughly 20 times in 2016 and each time I get dumbfounded by the amount of sexual abuse that runs through the church pews  and behind the alters that involve little children, boys mostly. I don’t know when it officially became a thing with alter boys and priest molestation but I know i made those jokes when i was at least 13, so that’s another 13 years that the church has been hardcore branded as a place where gross pedophile shit happens. Well this is the first mark in the changing of the brand. Throw out the image of a priest in a confession booth with a sexually confused 13 year old boy and replace it with the Bunny Ranch out in Nevada. It’s far from being the most kosher of activities to do in a place of worship and faith but PR 101 is a class that takes forever to master but one thing you’ll learn real quick is that its not easy changing a #Brand overnight. Taco Bell took years to change it’s image from selling ground horse meat as beef, to the cantina menu, till now where it’s being called the healthiest fast food option. Well the Church of San Lazzaro is at the chicken quesadilla phase, It’s still fast food so there’s that, but you know you’re not eating a diseased horse’s meat. Still bad for your health but making progress to introduce a healthy, non sexual deviant/exploitation menu option of the church.

I don’t know if that comparison holds up but you get my point. It’s better than pedophile stuff.