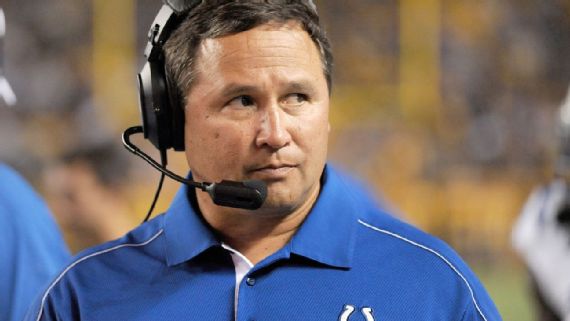 ESPN- The Miami Dolphins will hire Clyde Christensen to be their offensive coordinator, a source told ESPN NFL Insider Adam Schefter.
Christensen, who spent 14 seasons with the Indianapolis Colts, will work under rookie head coach Adam Gase in Miami.
But Christensen is not expected to call plays for the Dolphins. Gase said last week that he plans to handle play-calling duties after doing so the past three seasons as offensive coordinator with the Chicago Bears and Denver Broncos.
“I really enjoy that aspect of putting the game plan together with the offensive staff,” Gase said. “So going into this season, that’s how we are going to start, with me calling them.”
Christensen comes to Miami with lofty credentials. He was the Colts’ quarterbacks coach the past four seasons and worked with Andrew Luck. He also served three seasons as offensive coordinator with future Hall of Famer Peyton Manning and seven seasons as a wide receiver coach for Indianapolis.
The Dolphins (6-10) were ranked 26th in total offense last season and 27th in scoring, averaging 19.4 points per game.
Fourth-year quarterback Ryan Tannehill had another inconsistent season. It will be important for Christensen and Gase to make sure Tannehill and the offense trend upward next season.

Yo if you had to take a guess at his age you’d say maybe mid 40’s right? maybe late 40’s in some pictures but he’s 59! Guy turns 60 in like two weeks and looks like he should be visiting his dad in a retirement home, not the one himself to be in the retirement home. The guy just looks like a regular midlife dad. Tom Coughlin is 69, only 9  years older, and looked like he was about to become a mummy that haunts Metlife Stadium for all eternity. He looks like the same age and kinda looks like a rounder face version of Coach Taylor from Friday Night Lights and he’s only 50. Unbelievable.

As for the actual signing. It should be a pretty good one. As said before, the Dolphins want to bring Tannehill to the next level since they’re handing over garbage bags full of money to him with so far a bad season to show for it. Well the guy who developed Andrew Luck is a pretty decent start even though half of this past season he’s had back ups to work with. Aside from that the guys been an assistant HC, WR coach, OC coach, and TE coach. Guy seems pretty well seasoned from Colts. Well hopefully he see’s some potential in Tannehill and can actually turn him into an Alex Smith type QB instead of this mediocre QB/Once WR player that he is now. If all goes accordingly, next year might finally be the year where Tannehill breaks out **fingers crossed**.

Seriously though, can you believe he’s almost 60?