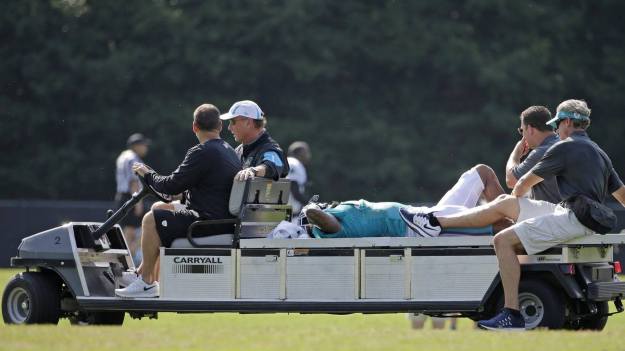 SPARTANBURG, SOUTH CAROLINA
The Dolphins lost a starter Wednesday. Louis Delmas lost more than a million dollars.
The question going forward: Has Delmas’ career been lost as well?
For the second time in less than a year, Delmas sustained what appeared to be a catastrophic injury to his right knee. Some nine months after tearing his right anterior cruciate ligament, Delmas has done so again, initial tests have revealed.
If the prognosis is correct, Delmas will be lost for the season and would have the longest of roads back to football. Teams were already wary of Delmas’ injury history; this offseason, he signed a contract with language that voided all but $400,000 of his $1.5 million contract if he sustained a season-ending injury in the preseason.
He also obviously will not receive any of the playing-time incentive bonuses that were written into his deal.
But after two ACL tears in as many seasons, Delmas, 28, would be fortunate to ever play again, industry insiders say.
“He’s a great teammate, a great guy,” fellow Dolphins safety Reshad Jones said. “It’s bigger than football. I just went to make sure his mind is right and say a prayer for him.”
Delmas went to the ground untouched during one-on-one drills Wednesday during the first of two joint practices with the Carolina Panthers.
Delmas collapsed in obvious pain while covering former Dolphins receiver Ted Ginn Jr., grabbing his right knee. He needed to be carted off the field.
Delmas is undergoing an MRI exam to confirm the severity. Dolphins coach Joe Philbin would not get into specifics when he met with reporters coming off the field.
“I haven’t really had a chance, obviously, since practice has wrapped up,” Philbin said. “Obviously, we’ll check on him and hope for the best.”

Its a god damn shame when a solid player like Lou Del gets injured in the preseason. Things were on the upswing the with Dolphins adding pieces like Suh to the defense, picking up a little on offense, Tannehills performing well in practice and preseason. So when we see a season ending injury in the secondary, it hurts. By all accounts Delmas was a nice genuine dude, never seemed like a dick. Had a Nice pick six last season before his same ACL first got injured. The big picture for him now gotta work on healing and if he can still have a career in the NFL or if he’s gonna be labeled as injury prone. Hopefully Delmas makes a strong recovery and still has some semblance of a career in the NFL. Time for people to step it up with Jones, Thomas, or Aikens.

On the other side of the field Kelvin Benjamin on the Panthers tore his ACL. Heard people say it was bad turf. Either way, hope these 2 heal up soon. This is kinda why i think steroids and HGHs kinda should be allowed. Human Growth Hormones just sound like they get more youthful and could heal better. Im on board for that.