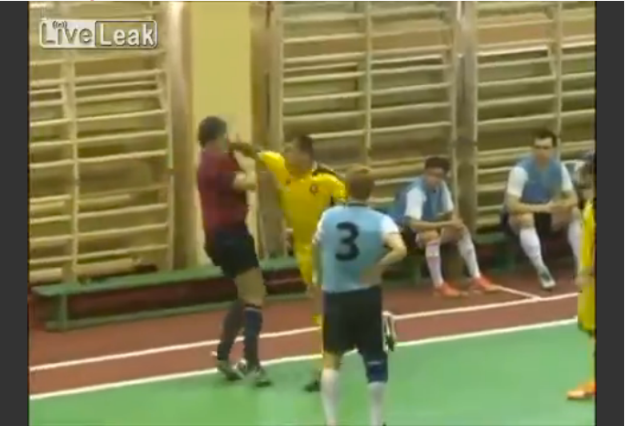 Love when soccer gets hardcore. Hate watching pussy soccer players flop. Take the game to the confines of an indoor gymnasium in a smaller hard floors and things just become gritty. Kinda like how when i picture pond hockey, its just kids playing a little game of shiny. No five minute majors, just a little roughing. Take the game into an ice rink and I want Gudbranson to lay a big check on someone. Well kinda same thing here. Slow ass game of soccer running on an Olympic sized field. Bring it in doors and I want players to bleed.

All that aside though, that ref got what was coming to him. Can’t just shove a red card in someones face when he’s being completely shut down from number 8 shoving him and tripping him up. Then outta no where the other boy in blue comes over and im pretty sure he was trying to curb stomp that dudes ankle when he was down and ball out of play. I don’t know the rules to futsal but if dont call that then you can’t call a ball being checked at you. And then you also can’t be mad if you shove the red card in his eye balls and then he punches you in the face. Street rules.

Someone tell that bitch to quite being so salty! From what I gather Futsal is just 5 on 5 soccer, and if thats true than these Brazilian chicks might be tougher than 90% of the Premier League, UEFA League, CONCAF, MLS any of those soccer leagues that I don’t understand. I mean by women’s standards, I would assume this would be the equivalent of like Steve Weatherford’s muscular ass putting the boot to your throat. I mean that chick probably doesn’t eat like birds pecking at salads. Brazilian chicks get their fair share of protein and her thighs show it. Built like a horse leg and the chick in orange just took it like it was a light jab to the chin. Got up and toughed it out. If this were Fifa id half expect the team to just throw an emergency funeral for the guy.