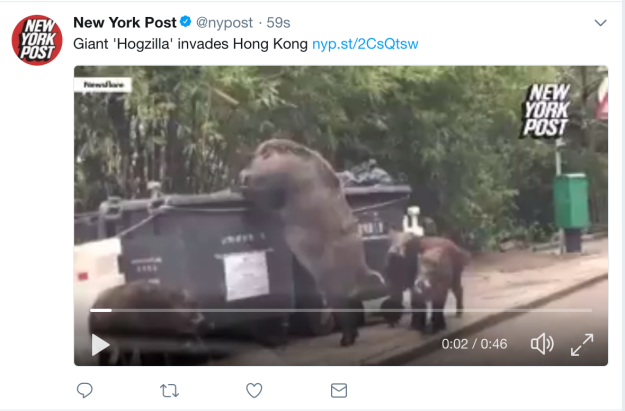 By now I have a sick feeling inside that people might be getting a bit sick and tired of the fantastic actor Dwayne “The Rock” Johnson (His daughter happens to be my neighbor, not that that affects my opinion on him). People may scoff and ignore his next major Blockbuster release Rampage. Well how the fuck can you scoff now when the plot of it is basically happening right there there in Hong Kong. Like twice the length of the other puny hogs around him and with roughly 5000% more muscle bulk than the others. Honestly must be like a god amongst them. I mean I’ve always heard that pigs and hogs only have feeding and breeding on their mind which is why they get castrated on farms, so they only eat and grow massive for meat. Well if they can get their brains together for one second and realize they have a leader who can take on humans and rule the world if we were just going hand to hand. I mean short of a 50 cal bullet I’m not even sure other calibers can take Hogzilla out. I mean yea i know shit head poachers take out Elephants all the time but Hogs are a whole nother animal entirely, literally. Same logic where a 9mm can probably shoot any person but when a crazy coked out juiced meth head comes charging at you. It’s gonna take a couple .45 probably. Well same logic as hogzilla except times 100 and bullets look like they’ll bounce off him when he charges the streets of Hong Kong. I mean it’s eating trash! It’ll eat anything and every thing and continue to bulk up. That includes, half eaten steaks, bullets, trash, humans, skulls, etc. Guy’s such a monster it almost makes me think he’s a marketing ploy now just so people watch Rampage. I don’t want to know monsters can happen naturally out there in the wild.