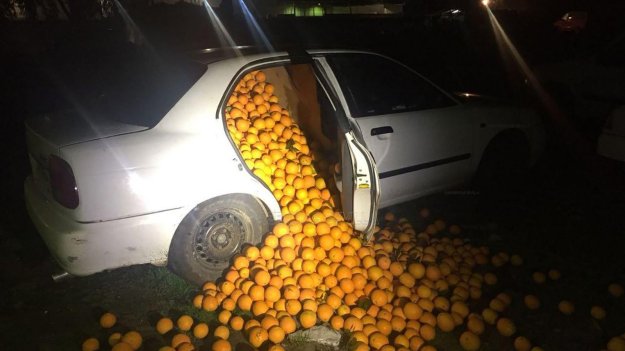 (CNN) — Take a look at this photo.
Yes, that’s a car crammed to the hilt with oranges.
Police in Seville, Spain, came across the bizarre scene when they pulled over two cars after a short chase.
According to Europa Press, officers suspected something wasn’t quite right when they saw the cars driving very close together.
When they tried to pull the cars over, they took off. A short chase through a dirt road followed, the news agency reported.
Inside the vehicles, police found the oranges.
Later, they found a truck, also packed with oranges.
Altogether, police recovered more than four tons of oranges.
The drivers claimed they were “coming from very far away and had been stopping and collecting oranges along the way,” Europa Press reported.
But cops didn’t buy it. They later learned the oranges were stolen from a shipment.
They charged the five people — a couple, their adult son, and two brothers — with theft.

You know how when you buy a bunch of groceries, you try to carry it all in one go? Left arm turns into steel with 9 grocery bags sending lactic acid straight into the forearm with your right arm completely free to key the lock and open the door. Well how the fuck was this guy gonna move what has to be like a couple thousand oranges all loose? Its comical to look at sure. Something you’d see in a cartoon or a comedy heist movie or something when oranges pour out onto the street, but when it comes to the fact of the matter, some one tossed oranges in the car one by one. That’s an excruciating amount of work for what can’t be more than 1000 dollars worth of oranges. Maybe a dollar over? Grand larceny that lends in what may be the least amount of street cred in the criminal underworld. I mean the least i can hope for is a sun roof that they could’ve just poured pounds of citrus into instead of one by one peddling oranges through the window, cramming the door closed in a packed car while still on alert waiting for 5-0 to come bust their ass with cargo pockets full of oranges.