Before she was Wonder Woman (Gal Gadot), she was Diana, princess of the Amazons, trained to be an unconquerable warrior. Raised on a sheltered island paradise, Diana meets an American pilot (Chris Pine) who tells her about the massive conflict that’s raging in the outside world. Convinced that she can stop the threat, Diana leaves her home for the first time. Fighting alongside men in a war to end all wars, she finally discovers her full powers and true destiny.

Well well well looks like DCEU has come out with a respectable movie. This was all the hype this week so you guys know this is what was coming. To be honest I actually saw Wonder Woman on wednesday but was too busy to actually get to blog it. Why? Because Miami is a fucking nightmare to drive through. See I decided to go to one of those booooogie ass theaters all the way in miami. Shit was pretty much a night club and I was about as under dressed as a hooker to a funeral. Seriously people were wearing silk shirts and shit to peep Wonder Woman. But besides that there was about an hours worth of construction traffic to treck through just to get back close to 95 and then another 20 minutes there so I was just dead stuck late as balls and the affect of Wonder Woman wore out. So yea, you get this blog a few days later, but then again this is also my site so I don’t have to make excuses to none of y’all.

So Wonder Woman. A lot of hype has gone down and well deserved because this is the first major expansion piece in the DCEU that hasn’t been affected by Zach Snyder. First part in actively competing with Marvel Studios and I think it did a great job. Now me personally I have some qualms. Things I don’t like in movies in general. Personally I think the movie was awesome for about 90% of it. I don’t know what the original origin story of Wonder Woman was, because I know they changed it a bit, but it was a good enough modern take on Wonder Woman, I thought. It was good that it was an origin story and wasn’t super tied to the other DC movies which let it kinda gave it free reign to go which ever direction they wanted. Now obviously this does tie into Batman v Superman, and I’m not sure how much was written then regarding the photograph scene used in BvS, but either way, they incorporated it really well into this origin story. Now what happens after this, I’m not sure about because I think the origin story and the setting of it all is what I like a lot about this movie, where I thought Diana Prince in BvS was cool, not great, but everything after as Wonder Woman I’m not sure of because she’s mostly just a Superman character after this. If Patty Jenkins stays and they have free reign to do what ever story type they want, maybe films after will be fine but if not, I’m expecting just a normal super hero conflict where this one she played the fish out of water character which was fun and well acted as well and had a really good emotional draw with World War 1 as the setting.

Speaking of World War 1, I think that was the best part of this movie. Her interaction with the world at such a bleek moment in history and what she could bring to the table. Honestly, fuck that fictional earth for liking Superman more. Did he ever fight in the Great War? No. Her origin in Themyscira and the land they built there was awesome and all kinda made sense and wasn’t an absurd story line which was great but once she stepped foot in the real world that’s where I really started enjoying the movie. There is a component where I just like non-modern times in action movies but really this one I liked because the contrast of a very brutal war on screen and what her fight in it was. I hate to compare it to other comic book movies but, its almost like Captain America mixed with Thor. Has that same pride filled character with a sense of duty as Steve Rodgers but was a fish out of water like Thor, only done much better than both those. But like I said, I liked 90% of it. What I didn’t like though was the last bit. Its very hard to do things differently and I’ll fully admit that because she is a Super hero with abilities and stuff but every time in the last fight scene where they do something with powers beyond normal human ability it gets a littttllllleeee cheesey. It just has a small bit of Zach Snyder stench that I just couldnt rub off. Some of it has to do with CGI probably and just outrageous action happening. But also it has something to do with ********SPOILERSSSSS*********** the fact that the final enemy was actually Ares. Don’t get me wrong, I do think it is in line with the movie, but I personally, liked the concept of Ares in this movie and her thought that Ares actually existed when in fact it was just the war and brutality of man. I mean I do think her motivations to fight would change a bit if it were just that, but I just didn’t think Ares himself needed to be in this movie. Now I fully understand her being in this world absolutely means that Ares is too. But to have him, be the final guy was a bit out there for me when I really enjoyed the down to earth grittyness of war. I figured the smelling salts that was turning Danny Huston’s character into the incredible hulk would actually turn him into an opponent that Wonder Woman couldn’t curb stomp right away or that there would be some tense moment where they needed to do the impossible to save a village from German soldiers.

All together it was a great movie and a huge win for DC. People though so far in the early releases are giving it an 8.5. That is a bit too high on my scale. For one like i said, I don’t like some of the cheesier self righteous dialogue and fighting towards the end. I get it but just not my cup of tea and I think could be done better. And also if you’re going to criticize Marvel for their weak villains I think you could make the same argument here. I mean again Ludendorff and the Doctor Poison lady were kind of weak to me. No real story behind them of driving factor and they both were pretty disposable. And I get Ares is the main bad guy in the end but I didn’t really care for his portrayal from who played him, to his look, to the heavy CGI fight scene. Like I said, me personally I didn’t liek the last bit but that is really only the last like 15 minutes of a great super hero action movie. Total score= 7.95 to 8.05. Gal Gadot was great pick. Honestly thought in my head that they shoulda picked a more jacked chick but Gadot was great and the chemistry with Chris Pine, who was also good, made for a great team up. The only thing is that stench of Zack Snyder lingers just enough to me and depending on my mood can swing between the two scores.

Now for some other stuff!

Gal Gadot. What a smoke bomb. And the other Amazonians in Themyscira, it must suck to be you. I never saw a single episode of Orange is the New Black but I imagine Themyscira is some what similar to an all female penitentiary except its on a tropical island. They must hate the super hot chick. I believe it was Al Bundy who said “Don’t try to understand women. Women understand women and they hate each other.” Well that last part must ring true all over Themyscira. Just chicks passive aggressively hating the fuck out of Diana. Sure there’s no competition for men there on their made up land but when your mom looks like Gisele Bundchen and the rest of the women in the yard look like girls from Pittsburgh with broad shoulders that would scare away any man, there’s a major reason for jealousy. Before i saw the movie I said I thought they shoulda went with a more jacked chick. Sure it wouldn’t be as hot probably but if I’m gonna believe this person fights the entire Central Army in the Great War, she’s gotta be able to bench at least like 200. Well I missed the point entirely. Diana, obviously born of god is like the coach’s son. Just privileged as fuck in god given ability even though she doesn’t look like she can curl 30s. Fights an entire army and doesn’t even sweat in the least and still looks like she can walk a run way. I said earlier above that I wasn’t sure how I would feel about any sequel to Wonder Woman just because it probably looses some allure for me if shes fighting in the modern world. Well the only natural event to happen in the DCEU is all the women of Themyscira become salty as shit and revolt to try to take out the pretty chick. I don’t remember what happens in Mean Girls either but I feel like its the Super hero version of that. All the chicks be catty towards the hot one and one of them will say “thats so fetch.” 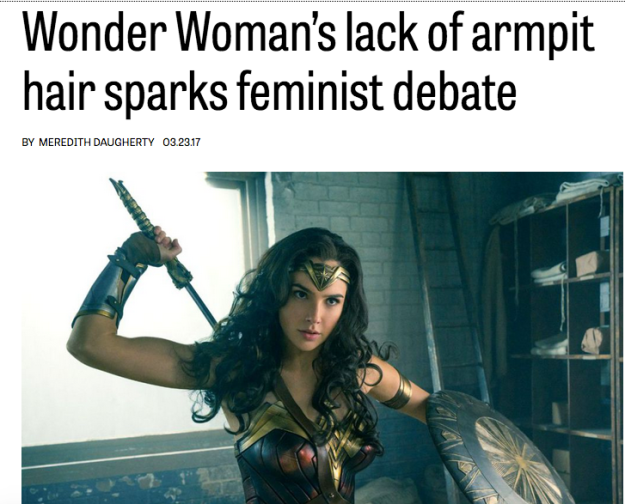 Give an inch and they’ll take a mile. You get a strong female lead that does well financially and opens the doors to many other female lead roles, but that’s not enough, they want arm pit hair. Honestly why would women even want arm pit hair. First off who’s to say Amazonians aren’t just the perfect breed of females who just don’t grow arm pit hair? Who’s to say she didn’t use Zeus’s sword to get the closest and most comfortable shave ever? Its recorded in comic book lore that Diana’s sword is so sharp it can slice electrons apart. That my friends is a close shave. But listen, you want to be a butch and ugly worker who doesn’t care about her looks because she too tired to shave after chopping trees, go ahead. You want to look like a super smoke paris run way model, go ahead. The point is Wonder Woman is hot and can flip a tank on your heads and all that shit. Oh and shes a symbol of truth and justice and all that other stuff.