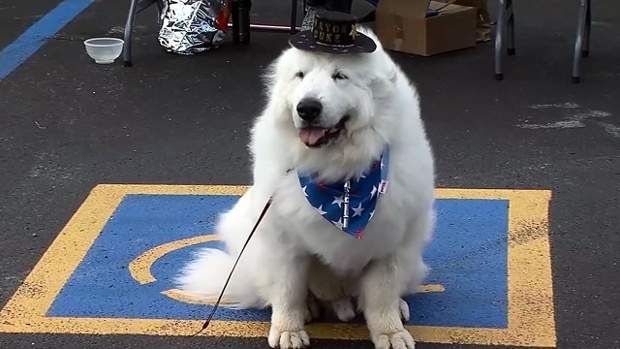 CORMORANT, Minn. —Nine-year-old Duke, a Great Pyrenees, handily won another one-year term as mayor of the small northwestern Minnesota town of Cormorant, Detroit Lakes Online reports.”I don’t know who would run against him because he’s done such great things for the community,” Cormorant resident Karen Nelson told Detroit Lakes Online.
The locals say Duke has one of the highest approval ratings in the country.
“Everybody voted for Duke, except for one vote for his girlfriend, Lassie,” Duke’s owner David Rick said.
Detroit Lakes Online reports the dog was unavailable for an interview, but his media people said he’s more than ready for a third term.
Duke was elected in 2014, when he defeated Richard Sherbrook, the owner of a local store, ABC News reported in 2014.

Hey Longville, you guy’s just let Duke and all of Cormorant’s citizens drag their nuts all over your face.  Do the right thing and make Bruno mayor already.