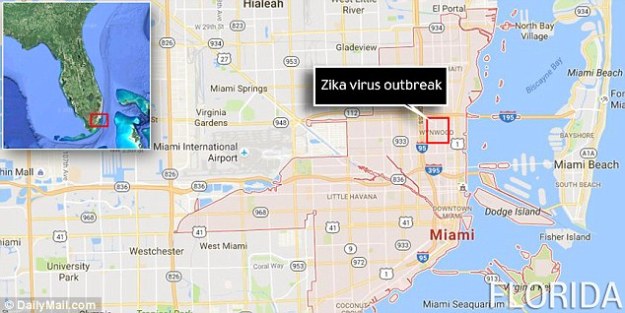 ten more people have caught Zika from local mosquitoes in Miami, Florida Gov. Rick Scott has announced.
It means there are now 14 cases of locally-transmitted Zika in the state, the first local outbreak of the virus in mainland America.
The new cases are clustered in the same square-mile neighborhood in Miami-Dade County identified last week.
Florida health officials said in a news release Monday they believe active transmissions of Zika are occurring only in that area.
But despite their insistence that everything is under control, Gov Scott has finally agreed to call in a CDC Emergency Response Team (CERT).
Read more: http://www.dailymail.co.uk/health/article-3718434/Governor-14-Florida-Zika-cases-likely-caused-mosquito.html#ixzz4G6t8J7MP
Follow us: @MailOnline on Twitter | DailyMail on Facebook

Hey future baby mama’s out there, hate to break the news to you but our child will probably have a deformed skull or something. That’s just the Florida life now. Don’t think it’s some medical disaster. That’s just the adaptive culture that is South Florida. The same way Seattle enjoys stealing all the culture of Japan because they’re close by, we just steal all the culture of South America because they’re close by. We get a small amount of Cuban population influx, we start opening up Romeus and Las Vegas restaurants. Your Mexicans are looking for more of a variety when shopping that Publix can’t supply, we give them a Sedanos. Brazilians making their way over here, we start opening Brazilian steak houses and contracting Zika viruses. We’re a second home to most of these people who are use to living in the poor squalor of their developing country and we just try to acclimate them as well as possible. We’re almost like a bootleg New York where we just let people in. And sure you can come here and try to make an honest living with out having a corrupt government keeping you as poor as possible, but you can’t escape zika cause now that’s just apart of your everyday culture that reminds you a little bit about home.

Sidenote- Another great conspiracy should be that the government brought over zika virus and released it in Wynwood to rid Miami of the hipster art scene. Someone should run with that headline.

Quick Side question- How did people know they were infected by zika. I thought that shit only affected pregnant people with babies. But like it also takes 9 months to cook a baby inside so has zika been here for 9 months? this question might be stupid but i dont read all the way so if someone could tell me that would be great.