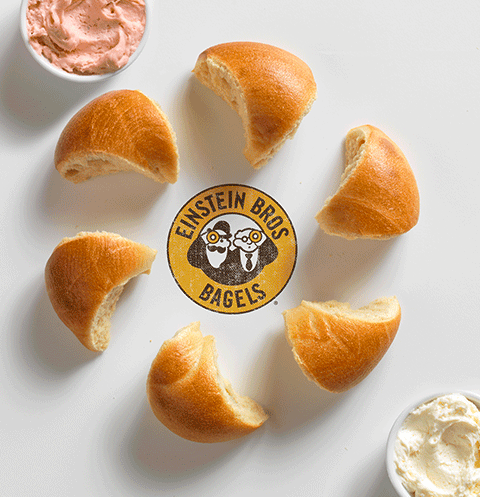 Source– There’s more than one way to slice a bagel – so says Einstein Bros. Bagels.
Their new Twist N’ Dip bagel exposes the delicate underbelly of the bagel-eating world: those of us (myself included, TBH) who snub the traditional hemispheric slice-and-schmear method in favor of breaking off bits of bagel and dipping them in the cream cheese a little or a lot at the time (double-dipping encouraged).

I love food but hate the “food community.” I hate people that think you’re suppose to eat things a certain way, but on the other hand, i also hate people that do weird shit with their food. I know its contradictory in ways but thats just how I am. Well with bagels ive had tons of push and pull on how I eat bagels. I grew up eating bagels with little tubs of cream cheese so I’m 100% on the tear apart group. when i go to New York however i get a bagel and once i started ripping it into bite size pieces i got people looking at me like im the social pariah as if i physically did not know how to eat a bagel from the the ordering process to the chewing process down to the digestion process. Its absurd how much people judge one another on how they eat a god damn breakfast food. Like yea if i had a sausage egg and cheese on a bagel ill eat it like a sandwich, but if we’re talking just plain cream cheese? Rip and dip is much easier. New York bagel places don’t do you any favors by taking like a pound of cream cheese inbetween your bagel that inevitably gets squeezed out because they serve that shit all wrong. Im done living with conformity when it comes to breakfast menus. Rip and dip all the way on bagels.

Also underrated is butter on bagel. I know people still do it, but it should really be 50/50 cream cheese or butter.