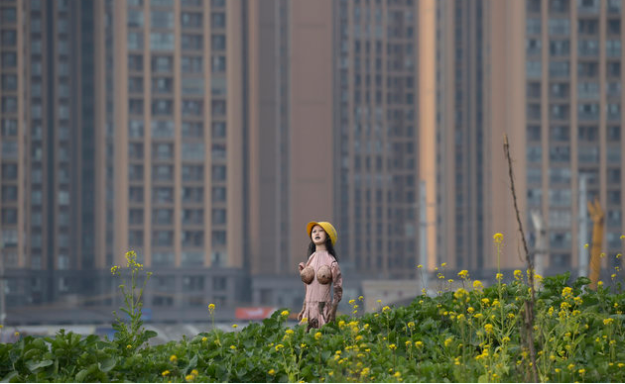 Source- A farmer keeps pests away using a scarecrow made from an inflatable sex doll.
The muddy sex doll also wears a yellow safety helmet and has reportedly been effective at scaring off birds – as well as people.
The stark-naked blow-up doll is thought to have belonged to a worker at a construction site near the field in Chengdu, capital of China’s south-western Sichuan Province.
It was then found by a local rapeseed farmer, who stood it up in the patch of greenery in order to ward off crows and other unwanted pests.

I would really like to know the special brand of people in china or around the world who go out of their way to order a blow up inflatable sex doll that looks like Smeagol from lord of the rings wearing a rag with a cut out for huge tits and a yellow construction hat. I mean maybe if you’re a child and still into big tits maybe that description turned you on but for me, it just made me imagine this thing crawling out of my laptop screen like the bitch from The Ring. It goes without saying that of course these birds wouldn’t want to come near this thing. I half expect the doll to come to life or its like the Jeepers Creepers thing where it pretends to be a scare crow and when a bird lands on it it snatches them with its mammoth hands and eats it or steals their soul or something.