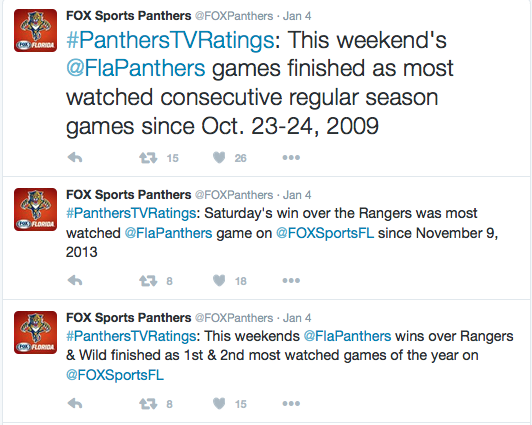 It’s worth noting both games were held in Sunrise, with huge nights at the box office (standing room/full sellout on the 2nd; 15,426 on the 3rd against a Western Conference non-factor). A seven-game stretch of consecutive victories heading into the Saturday/Sunday block may have something to do with it, but we’re pleased whatever the reasoning.

Ohhhh shit. Look like its time to move forward. Onto 2016. No more of South Floria being built on Football and basketball. The Dolphins STUNK this year. Absolute garbage. Marlins, trash. Both teams owned by people not suited to own teams and ended up firing coaches. Heat are still playing good basketball but people need to get over the Lebron era since Wayde is aging. Instead here we have the toast of the town winning 9 straight, top of the division, 2nd in the conference and 5th in the league, Florida Panthers! Do you see those stats and numbers?? We’re going to the playoffs and aint no one gonna stop us! Its gonna be a fleet of drop top ferraris cruising across town on 595 and 95 with the cup for the parade!

All jokes aside, this teams good. Right now one of the hottest teams in the NHL. Despite this though, we’ll just always have the crowd of people joking about attendance numbers. Listen, If Tuscaloosa, Alabama started an NHL franchise and won 2 straight Cups in its 1st years, im pretty sure the attendance would be similar. The South is just a football town first and foremost. It sucks but its true. People gotta realize BB&T isn’t exactly in a metropolitan area where people have high incomes and dead set on going out and spending money. We deal with it. When they’re winning they have a good crowd but even at that, i wouldn’t expect them to sell out the crowd every night with Panthers fans. Not to mention we also have the crowd of people chirping about more Montreal fans when we play them. Listen, we can’t help it that Snow birds want to leave their shitty frozen province for South Florida instead. If they want to catch a game they’re more than welcome but if we stomp a team’s dick like Montreal and the Rangers, then I don’t even want to hear it how theres more so and so fans than Panther fans at the game. Teams like the Caps can laugh all they want and have all the attendance they want but in the end its still all about winning to the players and fans and as it stands they’re in the same place as us. So all people blasting us about attendence still can suck a dick. We’re winning over 25 other teams in this league and that matters more.