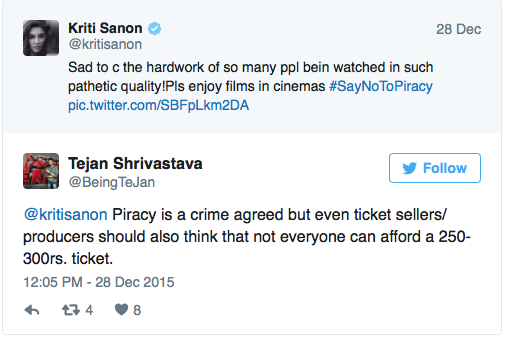 I don’t know what kind of actress or how big the celebrity clout of Kriti Sanon is but off the bat im gonna say she ain’t shit in bollywood. It always baffled me in college when we studied the business of film and the professors would always push this silly notion that Bollywood and Nigerian film companies churn out thousands of movies a year and claim that they have the real power. Name any real actress here in North America, If you sat next to them, or even on the same flight, you would know them instantly. Now if it was some no name shit sitcom star who debuted in a pilot, i wouldn’t know there name either. But you know what? Good chances they’re probably hot and you’d notice right away when you got a boner looking at her, and then got another boner watching the movie, and then you put two and two together and get another boner. That’s American cinema.

This bollywood work of so called film, looks awful. Like a bad mix of the Fast and the Furious franchise and some shitty rom com. Well guess what, Kriti Sanon? Those are EXACTLY the type of movies to be pirated. Not saying you can’t and shouldn’t pay to go to the movies, but Dilwale is just a movie you leave on and never once in your life take seriously. Its the type of movie when you’re with your friends at some get together eating curry and talk about stupid movies you saw and make fun of, that’s Dilwale. Shot super bright so bootleg copies are clearer than movies that take place in the dark, awful story line that doesn’t make sense so you don’t have to pay attention or care, and just loaded with action scene because we’re all still human after all. Perfect type of movie to watch if its a bootleg and you gotta crush a flight. If you were to tell me its like the Bollywood Schindler’s list or like Avatar where the effects really matter, i would agree with you, but I own crappy Chinese bootlegs of There’s Something About Marry and Fast and the Furious Tokyo Drift and those worked just fine for me.