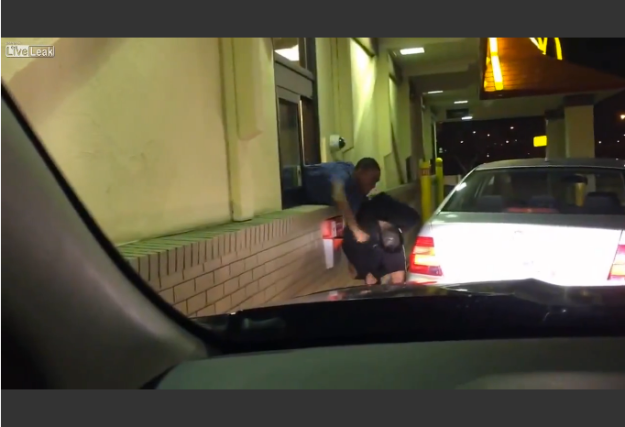 LiveLeak- “I was on my way home from Monday night curling league, I hadn’t eaten much since lunch time, and I was driving by a McDonald’s, so I thought I’d just swing in and pick up a BigMac while I listened to the end of MNF game on the radio.
At first I was annoyed the guy in front of me was taking so long, he seemed pretty upset to begin with, but it looked like when the McDonald’s guy handed him his cash and change back he dropped some of the dude’s change. That’s when he got out of his car, spit on the drive through window and tried to punch the McDonald’s and that’s when I started recording.”
This took place yesterday in Northeast Minneapolis.
[Credit: Gabe Hart / licensing@viralhog.com]
Read more at http://www.liveleak.com/view?i=6e9_1446578469#9dbILWaIbI10XF3p.99

Not a good look here if you’re the McDonalds customer. You almost can’t be more disadvantaged in this fight trying to hit a guy that has full mobility while you only have a torso up fighting out of a window, yet here we are, dropping fools in the MickyD’s drive-thru getting blogged about 2 days later. From the description he seems like a short tempered fellow, well if he’s the type to get mad often how does he not know how to throw a punch? Literally the only thing he had in his arsenal was doing EVERYTHING he can to pull on the guys tie. A cheap, restaurant issue, probably clip on, tie. And he couldn’t even do that. Not with the full force of his weight and gravity could he yank it off. Didn’t think about throwing a jab. Surprised he was daring enough to try to kick, but after one attempt he still got held down. All out of a drive thru window. Guy doesn’t even deserve McDonalds after that performance.

P.s- How about the video guy casually being in a Monday night curling league. I don’t know much about Minneapolis, Minnesota but i feel like that’s such a Minnesota move. Just cold weather sports even if that means curling till 11 at night and you gotta catch the 4th quarter on you way home from a sweaty tired curling match.