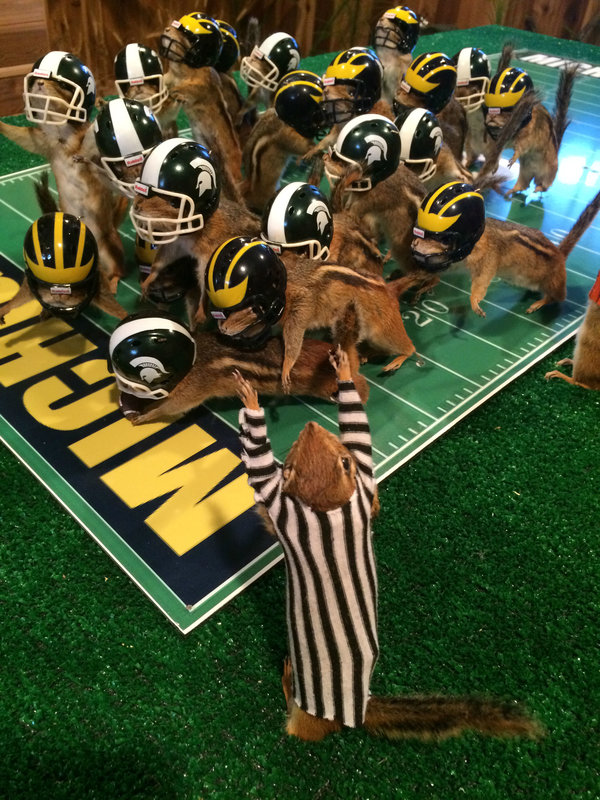 SOURCE- This photo taken Monday, Oct. 26, 2015, shows stuffed chipmunks portraying players on the final play of the Michigan State-Michigan NCAA college football game at the home of taxidermist Nick Saade in Lansing, Mich. Michigan State’s Jalen Watts-Jackson returned a fumble for the game-winning touchdown on Oct. 17. Saade tells the Lansing State Journal that the chipmunks were trapped by friends as nuisance animals.
Saade’s first piece sold to a Wolverine fan in New Jersey for $1,500. This one is for sale at the same price, he said.

Well thats one way to immortalize a famous bad beat. I gotta say though, this guy totally fucked up by not having a taxidermy Jim Harbaugh Chipmunk. If someone wants to empty out $1500 on a piece of historic art in the form of dead chipmunks taxidermied immortalizing the last play of Michigan vs Michigan State,  I would need the details to be down to the t and that would include a dead chipmunk in khaki’s and a Michigan hat looking like he’s ready for war. I mean does this guy even have a little Paul Bunyan trophy? How about capturing the emotion of the crowd? Maybe mix in a couple of pygmy rats with the look of utter disgust and shock. Not saying I don’t enjoy this guys enthusiasm for immortalizing a historic moment, just saying I wouldn’t pay $1500 for it. Maybe like 100 bucks at max.

P.s- If he could do this for the John Elway play where he helicoptered in a touch down but have the chipmunk actually spinning that would be kinda cool too. What other plays would be awesome? Maybe Joe Carter? When Larry Bird stole the ball?