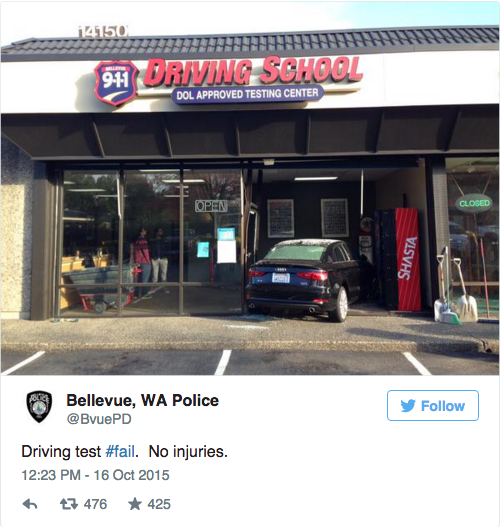 Huffington Post– A student driver in Washington state learned the subtle difference between the gas pedal and the brake on Friday when she crashed into a driving school.
Authorities in Bellevue snapped a quick photo of the scene. No injuries were reported in the incident.
Police responded to reports of a car that crashed into a building around 8:30 a.m.
“Unfortunately, that student mistook the gas pedal for the brake, sending the car into the building,” Seth Tyler of the Bellevue Police told KOMO.
Police said the student is a woman in her 20s who is new to the country. She was approaching the end of the test when the accident happened.
“She was doing great up until that very last part … [and she] did drive through a plate glass window, so that was a fail on the test,” Tyler noted.

Well that could’ve gone better huh? I can’t even comprehend how that happens. I mean first off this was at the end of the test. She did fine for the entire 10 minutes driving, not running anyone over or plowing through any buildings. But I guess some people can’t over come the 4th quarter pressure when you’re down to the final 2 minute drive and fumble everything horribly wrong. You think it was the pressure of 4 free wide open parking spots? Was she distracted by the Shasta vending machine which I’ve never seen before and thought the company died in 98? Must’ve been the complexity of the 40 thousand dollar European luxury sport sedan known for its technology to improve safety and ease of driving. Either way, she’s not ready for the road and should probably stick with Uber for now.

P.s- My dirty little secret is i actually failed my first driving test. It was such a bullshit reason. It was at the DMV in Oakland park. It was basically entrapment. Guy wanted me to fail. I never told anyone about it, but it eats away at me sometimes when I think about the DMV. 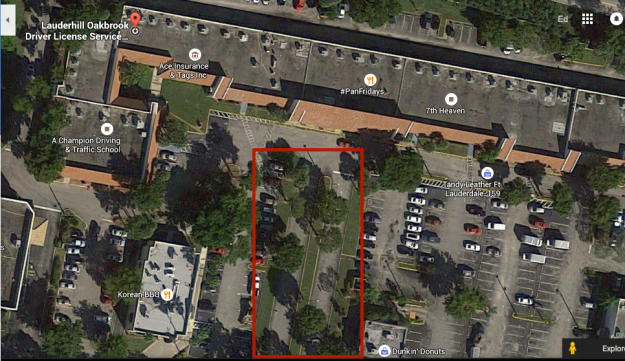 The whole time the exam dude was giving me the look like “is he gonna fail it? I bet he’s gonna fail it” but i had no idea so i just did my thing, everything went smoothly. Nailed the 3 point turn. They don’t make you parallel park or anything. But as I turn to go up that road with the median, he’s looking over at me being all coy and shit. See what that fuck didn’t tell me was that one lane was actually 2 lanes even though there’s no dotted line or arrows to even kinda let you know its 2 lanes to turn in 2 directions. I thought it was one. Right as i turn i hear him go “Ohhh yea im sorry i can’t let you pass this exam… You see buddy, that was actually two lanes and you were driving in the middle the entire time” and he said it was a fucking smile on his face. I didn’t even bother arguing it with the guy that there was no lines indicating that it was two lanes or anywhere that said it was two because i was so taken aback by how much this guy wanted to trick me into failing. They start off all buddy buddy with you and the next thing you know they’re smiling like the devil failing and emasculating you by denying you’re drivers license.  I think i told all my friends i nailed it in one shot but the truth burns inside me to the point where I hope the DMV instructor dies.