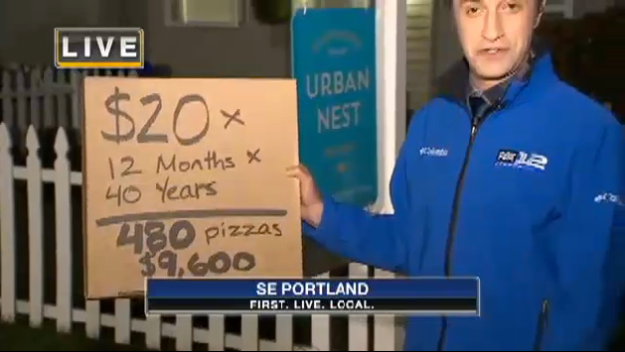 PORTLAND, OR (KPTV) –
A Portland family got free pizza for life just for selling their house.
Rob and Holly Marsh put their home on the market just a few days ago. In three days, they had four offers, but one stood out.
“I felt like I was in a poker game,” Donna DeNicola, owner of DeNicola’s Italian Restaurant in Southeast Portland said.
At DeNicola’s, pizza is serious business. There it’s not just food, it’s now a bargaining chip.
DeNicola’s offer was $26,000 over the asking price. She threw in free rent for two months and to top it off, she put in a special clause.
“Then I just kind of added, I’ll throw in one pizza a month for life,” DeNicola said. “I’m willing to do anything because I know this market is crazy.”
According to Realtor Nathaniel Bachelder with Urban Nest Realty, inventory is at a historic low. He says, as of the end of April, if every home on the market sold, they would be gone in less than two months.
“People are waiving inspection contingencies, waving appraisal contingencies. I’m seeing more offers sight unseen,” he said.
Home buyers in the Portland area are having to go the extra mile.
“You kind of have to get creative at this point,” DeNicola said.
DeNicola said free pizza is a small price to pay for getting what they wanted.
“I’m going to be buying them a pizza for life, so I will know them very well. I’ll watch their kids grow up,” she said.
“I really feel like they wanted this place, and they understood where the seller was coming from, and they built an offer around that,” Rob Marsh said.
How much pizza does this all add up to? At $20 a pizza every month for the next 40 years, that adds up to 480 pizzas valued at almost $10,000.

Everyone loves pizza. Thats one of the easiest facts in the world. Anyone who says they don’t like pizza is a fucking liar. Everything about it. The cheesiness, the sauce, the crust. Everything you need, nothing you don’t. That being said It was obvious the play here was to offer pizza if you have a pizza place. I want to get to the point where Im rich enough to have my own pizza place that almost makes no money because i get them all for free. It should be one of the strongest business strategies they should teach in business schools across america. Curriculum at Harvard school of business should tell you that once an offer is below 50% success, you offer a free pizza. Frankly I think the buyers gave up too much. I would of offered a couple thousand off the asking price and then when they scoff at your offer you throw in the caveat, Free Pizza a month for life. Thats business 101.