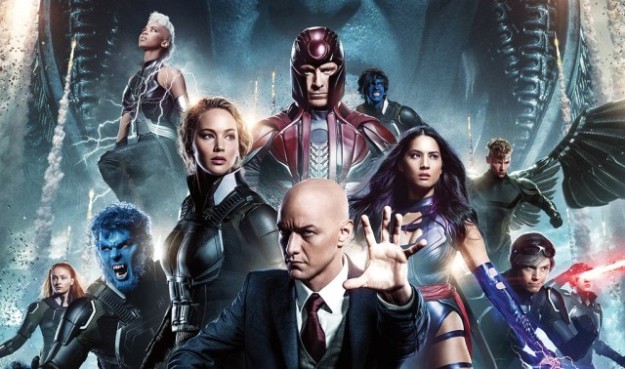 Here we go. Summer time movie season is one of my favorites. Don’t need to pretend to be intellectual when going to the movies because everyone knows summer is for blockbuster movies where things blow up. Last time I gave you Captain America: Civil War, this week its another Marvel comic book movie X-men Apocalypse. All in all a decent flick. I’m not looking for anything smart or overly complicated. Just wanted a world ending scenario that gets solved in like 30 minutes via a battle scene. Civil War was better of the summer comic book flicks by far but I give X Men Apocalypse a solid 7.5/10. Of the rebooted X men series, I thought this one was the 2nd best. Days of Future Past comes in at 1 and First Class at the bottom because its the cheesiest and if it wasn’t for the fact that I enjoy fantasizing about Rose Byrne, First Class is steps below DoFP.

Now we all know the main plot of premise of Apocalypse right? Apocalypse comes back to life because a couple of Egyptians bring him back and he’s dissatisfied with the world so he plans to wipe it out and do what with it? no idea really. Build it all in his image i guess? Maybe a harem of Egyptian mutants chicks to serve him? That’d be pretty cool. Well after the hearing about Magnetos family getting murked, Charles tries to find him but in the process Apocalypse senses the Professors telepathy powers and gets a super hard on for it so he snatches him wheel chair and all and its left to the team to go save him before Apocalypse wipes out all standing structures. Like I said. Simple, decent amount of action. It’s a 7.5. Now onto the random stuff.

Moses Was The World’s Second Most Powerful Mutant

I mean this is a no brainer right? At least in the X-men universe now that they know that the whole 4 horseman of the apocalypse scenario was really a mutant than only a thousand years and a few steps later has to lead them to believe that Moses was won of them. Not only was he one of the world’s most powerful mutants but I bet he was suppose to take out Apocalypse in one of the most ultimate 1 on 1 battles right? Egyptian high Pharaoh mutant versus a lowly Israelite mutant. Now in a head to head battle I’m still pretty sure Apocalypse wins in a 7 game series but I wouldn’t exactly sleep on Moses either. Yea Apocalypse has the upper hand pure strength wise, the guy can manipulate his form, shape, density, etc. Telekinesis is obviously an upper hand and being able to manipulate things on a molecular level is pretty dope, but you gotta look at what Moses has done and know that it would go to a full 7 games.

En Sabah Nur has to cheat life by putting his mind in another mutant’s body so I’m just going to guess that Apocalypse has an average life expectancy of 80 years old. A decent amount of time to control so much power but Moses lived to 120 years on sheer will to try to find the promise land. Durability wise, that puts Moses as a clear advantage over Apocalypse. He’s like Jagr or Gordie Howe, playing and contributing way beyond the typical prime age. So we already have a durable fighter in Moses but he’s also powerful as fuck. Maybe a powerful telepath like Jean Grey could part a lake or something but Moses parted an entire fucking sea. The amount of mutant power one has to have to part and ocean long enough for your crew of Israelites to cross the ocean and then obliterate an entire army afterwards? Pretty hardcore shit. And then best of all are Moses and his ability to create the events of the Plague of Egypt. Manipulating elements such as water and turning it into blood? That’s definitely on par with anything that Apocalypse can do. His ability to control animals? That must be a bitch to deal with in combat. Sure he only sent frogs, lice, and locusts and shit that’s annoying more than anything but I’m pretty sure if they fought maybe somewhere down by the pacific he could manipulate sharks or something. That definitely kicks that ability up a notch. Thunder storms and hail? Hey Storm, you’re probably related to Moses. What else was there? Oh yea death of the first born. Thats the “I’m Not Fucking Around” Moses ability. He’ll just kill your kid. Lamb blood or no lamb blood, that mother fucker will fuck around and kill your baby just for fun. Does that have any real statistical effect on Apocalypse? No, but that’s just one of those intangibles you gotta look for in a fight. A guy who’s willing to go a little bit crazier than usual. Tyson bit off Holyfield’s ear, Moses will silently kill your kid in the dead of night. Id put my money on Moses.

Also going back for a second to the whole frogs locust and lice things…..

Jews And The Mutant Gene 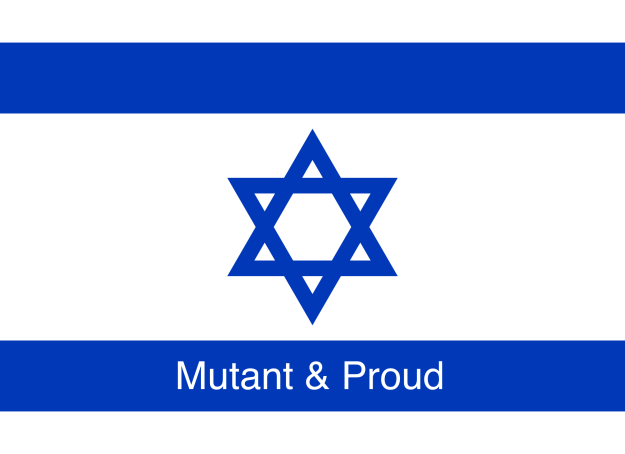 You know who else had the ability to control animals? Little Nina Gurzsky, Erik’s daughter. Now there are obviously parallels between mutants and Jews especially in Nazi Germany time. Things like in DoFP where they keep them in interment camps and stuff and First Class having a setting in Auschwitz with Erik as a kid learning to be Magneto. And sure its a small sample size of mostly of Moses, who I’m pretending is a Mutant, and Magneto but there has to be something about Jews and mutants. What exactly I don’t know but Moses, the Middle East, Egypt, Magneto and the fact that Erik’s daughter has abilities like Moses, there has to be some relation and if not they should make it one because it seems like Jewish Mutant are more special or more powerful than the others. The Chosen Ones Chosen One’s.

Jeez, Buzz Lightyear. Keep it in your pants. Now I know I’m suppose to assume Blights is a male but that doesn’t mean I have to assume his sexual orientation is heterosexual. Hey Cyclops, congrats on having a pair of DSLs bro.

How is this question being asked? No one actually thinks this is a tricky match up do they? Hogwarts, as much as I grew up with them, ain’t shit. Voldemort ( yea I said his bitch ass name) has yet to do anything in the real world I think. So yea killing curses are cute and all but has he ever had cold steel pressed against his dome? I think not. One gun shot is all it takes and that’s probably the most pussy attack in x-men history. That being said, its Mutants in a land slide. Xavier taps into their brains and wipes out their memory, Tom Riddle wanders the earth getting made fun of for having no nose. 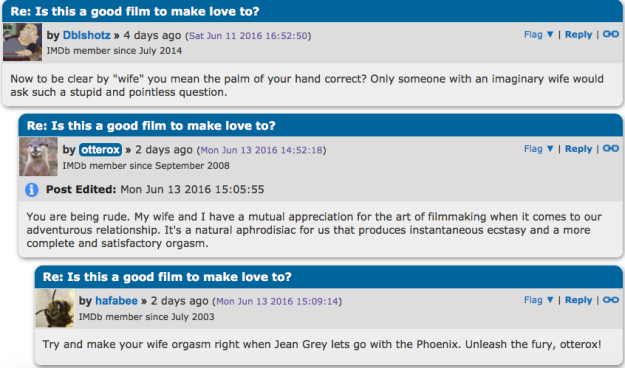 Well Otterox, way to brag about having sex with the wife. A bit of a humble brag but that’s neither here nor there. First off it depends what you think makes a good film to make out too. Maybe you’re like Jerry Seinfeld and can get off while watching movies like Schindler’s List. Me personally I don’t wouldn’t want for sex to get in the way of a decent summer blockbuster. Nothing sexual about watching Erik Lehnsherr cry in anger watching his wife and daughter get murdered (Spoiler alert!). Maybe if the cast was a bit hotter? I know Buzz Lightyear up there can’t not picture Cyclops sucking a dick but aside from Olivia Munn in a total screen time of 5 minutes scattered here and there, there’s nothing sexy about the cast really. If you want to get your rocks off watching a grey/blue guy want to decimate the modern world then go for it but it wouldn’t be my cup of tea to get the mood going.

Alright well that wraps it up for the X-Men Apocalyspe screen rant. I still hold firmly that Moses was a powerful Mutant and don’t tell the Christians or Muslims otherwise. Anything I miss or have a movie suggestion? Leave a comment below.