Atta boy Jags. If I’m gonna be completely honest I didn’t think Jagr was gonna win it. I had Pascal Dupuis winning it. The Masterton has usually been given to people who had to have a big career come back from performance or health issues. Last year Dubnyk was a journey men who finally came out looking like a steel cage in net. Before that was Dominic Moore who came back after an 18 month hiatus cause his wife passed away. These are guys that you wouldn’t expect to be a major player after some life event. But then again one of the things that affects us all seems to have little effect on Jagr and that’s aging. We don’t have to go through the list because you know all the facts. He’s old and better than half the league and for that, he definitely deserves the Masterton. Gonna be kinda weird though when he gets nominated for it again next year, and the year after that, and the year after that, and the year after that because Father Time was undefeated until he met Jagr. 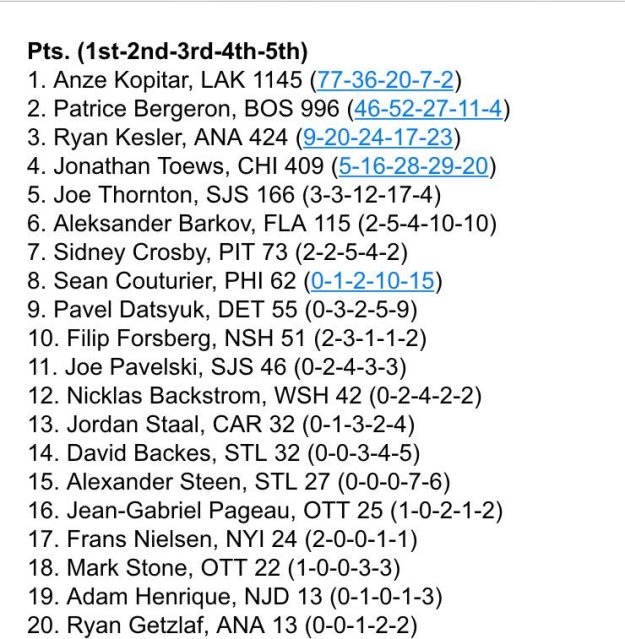 Ballots show that Barkov was 6th in votes for a Selkie. He’s coming close, like really close to winning a Selkie. He came second in for the Lady Byng ultimately losing out to Kopitar but soon enough Barkov is gonna have this Kopitar-esque season and come home with the Selkie and Byng trophy and if we’re luck enough a cup. If he played in an O6 team he would be a Canadian house hold name but because our market isn’t the most conventional, we’re just gonna have to contend with the fact that we have one of the most underrated centers in the game and I’m okay with that.

Also with some votes for Norris was our boys Ekblad and Brian Campbell. With all the talk about his free agency its a little hard to appreciate him in the moment, will he resign or not no one can really say but him and his wife but i appreciate his time while he’s here. Maybe if we get the deal with Yandle done we wont need him or maybe that and the salary cap jump can persuade him to stay in a place that’s close to winning a cup. Not to mention Florida has no state income tax so theres always that, Brian. Oh and as for Ekblad, he’s gonna win a Norris one day too. Im not asking him to be Bobby Orr and rattle off 8 consecutive Norris Trophies after his second year, but in the future people are going to be asking their young defencemen to be like Ekblad and have great hair and put up a shutdown defense performance from 19 year olds that look like their 30….oh and win a couple Norris trophys because he will finish his career with one.

Aside from that Gerard Gallant came in second to Barry Trotz for the Jack Adams. Can’t argue against Trotz much. Guy is loved by players and commanded the best team in the regular season. If the Caps didnt win the presidents trophy though, I think they all would’ve given it to Gallant. Guy took a team that was on the bottom two years ago to Atlantic Division Champs. Sure some teams in the east were bad, but you’d be a fool to not think Florida was good and Gallant was a big part in that.

Oh and we got a little sneak peak at the new jerseys in action via video game form. Guess what, I can tell he’s not a Soccer Player!