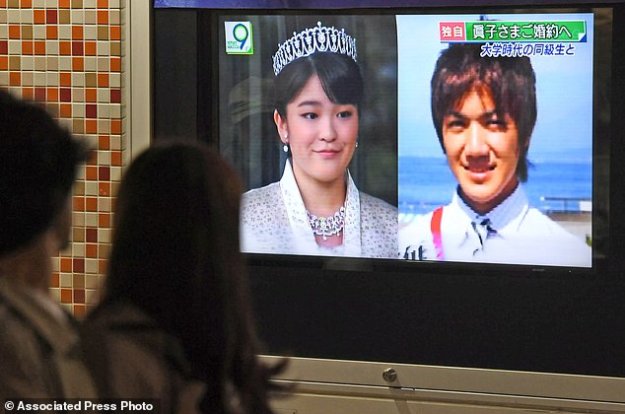 DailyMail- A Japanese princess will give up her royal status when she marries a beach tourism worker she met in a restaurant.
Princess Mako, the granddaughter of Japan’s emperor, is getting married to ocean lover Kei Komuro who can ski, play the violin and cook, it has been claimed.
The man who won the princess’ heart, was a fellow student at International Christian University in Tokyo, where Princess Mako, 25, also graduated.
Once they say ‘I do’, she will lose her status – despite being Emperor Akihito’s granddaughter – as Japanese tradition dictates and become a commoner.

Yo Kei Komuro, you better have the goodest dick in at least all of japan to be able to be okay with letting Princess Mako become a commoner. This isn’t like marrying a little outside of your tax bracket, It’s taking her from the highest position possible and turning her into a low life poor person with no royal connections ever again. That’s giving up a lot for your tour guide ass. He’s not some ripped hot bod ninja guy, not rich, not a respectable job. Is he funny? maybe? But that alone isn’t worth giving up royalty for. Also quick note of advise if I were Princess Mako here. Have guards at his doors and 24 hour surveillance leading up to the wedding. Enormous amount of pressure is probably caving down on him the second her parents were enthused about her marrying a bum. And I get it on their part, when there’s royalty at play you gotta do what you can to claim the throne. If this girl wants to give up that royalty life then go ahead, no ones stopping her. But he knows once she steps into the normal life and just becomes Mrs. Mako the fairy tale illusion goes away and she’s waiting in line for her sushi coffee order and pays the same amount as the bums and that’s it. That’s life as non royalty and it sucks.