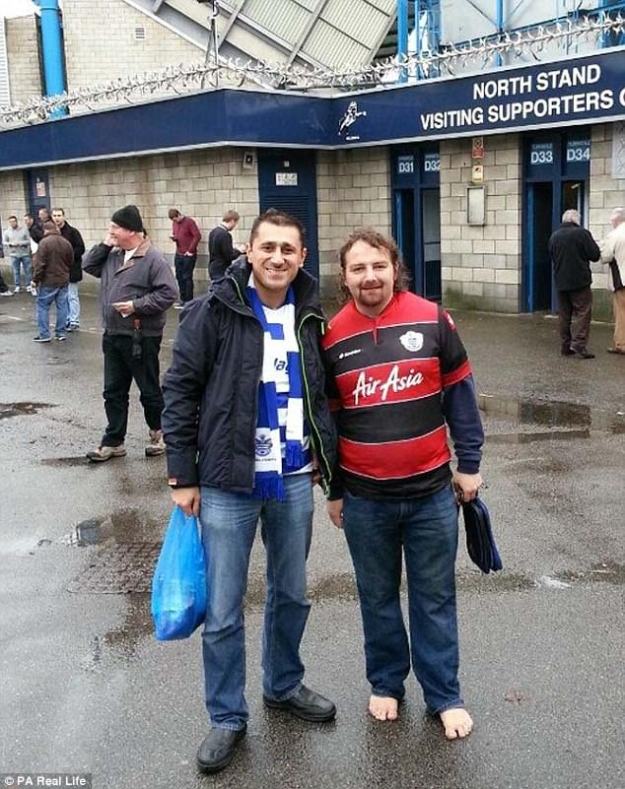 A man has revealed how he hasn’t worn shoes for four years, in a bid to stop his feet from getting sweaty and smelly.
Ben Donnelly, 33, from Kensington, London, has always loved the freedom of walking shoeless.
In his teens, he read about the barefoot movement online, but it wasn’t until he went to the University of Surrey to study music and sound recording in 2002, that he started embracing it himself.
Four years ago, after changing jobs from a music teacher to a private tutor teaching a range of subjects, he started going barefoot full-time and as well as walking to shops, through the park and even going on the tube shoeless, he would work barefoot.
While he attracts strange looks from strangers, his girlfriend, art curator Carolina Lio, 32, supports Ben’s decision to boycott footwear.

Such an appalling  move from Ben Donnelly over here. Honestly what we’re looking at here is an insane man who has a questionable logic. I mean its one thing if you’re a recluse who lives in a fancy modern home that you never have to leave but to live in the city and being barefoot is the dumbest thing I’ve ever heard of. I mean imagine walking one city block in New York city barefoot. You step on broken glass, ac run off, piss, vomit etc. Oh but a little sweat and some foot odor is unbearable. What kind of logic is that? Load up your sock with Goldbond and Axe body spray or something. Don’t just go trotting around London with your gross hobbit feet stepping on public transit and shit, you lunatic. And the girlfriend saying shes okay with this. That’s a lie. And not to be mean, but if she was a perfect 10 prancing around town with her man crush with no shoes on she would be shunned but most likely shes fine with staying inside with the guy. All good and well until they get married and then shes gonna say this

“Hey Ben, love of my life who I’m marrying. Do you think maybe this one day you can put on shoes? you know our wedding. The day we celebrate our love for each other?”

and then that’s when shes gonna lose it. No way skin toned feet matches with any belt that looks good with a suit. Everything is going to get thrown and then when he’s standing up there he’s probably gonna wiggle his toes a little bit in front of the alter and everyone is going to be whispering commentary to each other while shes walking down the isle and she’s going to want to die. All because this guy wont wear fucking shoes because he’s afraid of a little sweat. One second into that wedding shes going to wish this guy gets an infection from being barefoot like Bob Marley and just die. Just wear fucking shoes man. Or at least sandals.