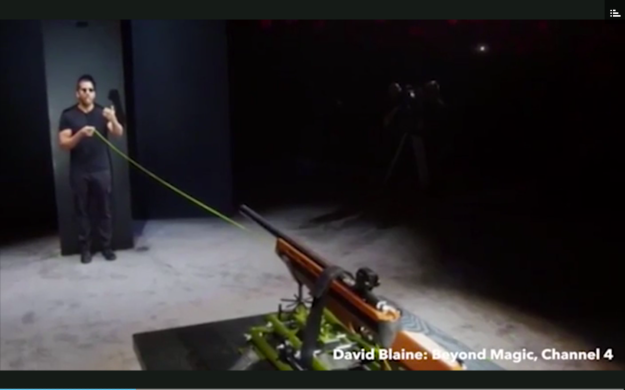 Daily Telegraph- MAGICIAN David Blaine is known for his crazy stunts, but he has risked death in his latest trick — which saw him shoot himself in the mouth.
The 43-year-old’s show Beyond Magic, which aired this week, showed a clip of him spitting out frogs to a live audience which included footballer David Beckham, The Sun reports.
The show’s main event was Blaine’s famous bullet catch, which he first attempted in 2010.
Blaine has revamped the trick by pulling the trigger on himself, in front of 20,000 people at Las Vegas’ MGM Grand Garden Arena.
The performer prepared for the dangerous trick by allowing friends to shoot him in the chest, while wearing a bulletproof vest.
He was then fitted with a special gum shield to hold a metal cup, in which Blaine would catch the bullet.
But the cup was slipping in and out of the grooves of the mouth guard, showing the first sign of later problems.
Blaine held a rope attached to the rifle, while the laser pointed to the spot where the bullet would hit.
As Blaine tugged on the rope, the bullet was fired into the cup — but the gum shield shattered in the process.
Speaking over the action, Blaine’s narration explained: “Time just started to move really slow.
“When the bullet struck the cup, there was a high-pitched ringing in my ears and I felt an impact on the back of my throat.
“I was sure the bullet went right through my head and that I was dead.
“Suddenly I became aware of the pain and it brought me back. At that moment I realised that the mouth guard had shattered again, and I was alive.”
After being checked over by doctors, Blaine discovered that he had a lacerated throat — and his friends have refused to assist with the death-defying stunt ever again.
But, shockingly, Blaine still plans to do the trick in his upcoming world tour.
This story originally appeared in The Sun and is republished here with permission.

I fucking hate David Blaine. Guy thinks he’s some more worldly deep introspective type of guy. Bro you’re a fucking magician. You perform tricks and are here to entertain idiots walking around New York City. Don’t even understand how the fuck he’s still around. Like not like he does any dazzling tricks that makes me contemplate whether or not he has some paranormal ability. Half the time it’s just shit where he doesn’t have to move for a few hours. I guess thats the magic am I right? Not the fact that he’s doing anything special, but the illusion that he does something vastly profound and unbelievable just because of the height he’s doing it from. Sitting on a platform 100 feet in the air, sleeping in a box under a tank of water. It’s all just not moving but as long as there’s some element of risk it’s like he made an elephant fly and vanish in mid air.

Well add this to his list of things he does that are neat at first but with some thought, aren’t that impressive at all. Shooting into a guard thingy? I get it’s risking life or death but i doubt he was firing a .308 here. I’m pretty sure it was probably a .22lr hollow point. Fragments on impact and doesn’t penetrate much. Dick Cheney could walk that off. Next, that gun is clamped the fuck down. Movement to the left or right could’ve fucked up his face for sure, but not like its gonna fly up and hit him dead ass in the brain. Rig it up to have a hair pin trigger then there’s not much wiggle from him in case it fucks up. It’s dumb to do yea, but I could recreate that same trick and pull it off in like 5 tries. Maybe to these wussy Brits who’ve never held a gun before think he’s gonna some how miraculously survive having a 1 oz lead slug exploding his brain, but its more equivalent to catching a fast but tiny pebble in the same exact spot it will always hit. It’s dumb and I wish it was a .50 BMG instead.