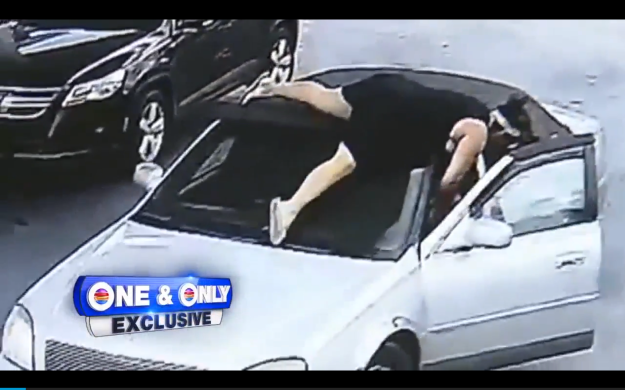 Sun Sentinal- Determined not to lose her purse, Janelle Della-Libera made a desperate jump onto the hood of a Cadillac at a Dania Beach gas station as the thief tried to get away and eventually got her left foot run over, WPLG-Ch. 10 is reporting.
“My instincts kicked in and I wanted my stuff back and I didn’t want to be taken advantage of,” Della-Libera, nursing a severely sprained ankle, told the station about Saturday’s encounter at a Mobil gas station at 3991 Stirling Road.
Surveillance video shows a man getting out of the Cadillac and grabbing the purse from her SUV as Della-Libera is pumping gas. After she realized what happened, Della-Libera jumps onto the car’s windshield as the thief continues driving until she eventually falls to the ground where he foot was run over.

Perseverance, I believe by definition, is what Janelle Della-Libera has shown us today. Im a big intangibles guy. Give the ball to a perfectly sculpted human and he still might not have what it takes to win the game. You need more than that. Guts. Grit. Miles and miles of heart. But one you especially need is perseverance. No hesitation when it came to a game time heat of the moment decision to leap her ass onto the purse snatchers car. No screaming for help, no crying. Just dug her cleats in and charged like she only had one job, to recover the purse. It’s not everyday you get a player like that willing to get her ankles smushed by a 4000 pound Cadillac Eldorado. Just laying blows to the guy absconding with her purse with out thinking about everything around her and how ridiculous she looks on the hood of the car smacking a man with her purse. Did Cam Newton try to recover a fumble during the Superbowl? No. Did Janelle leap onto the hood of a Cadillac to try to get her purse back even though it just let to her falling on the ground and getting her ankle crushed? Yes. It says a lot about a person