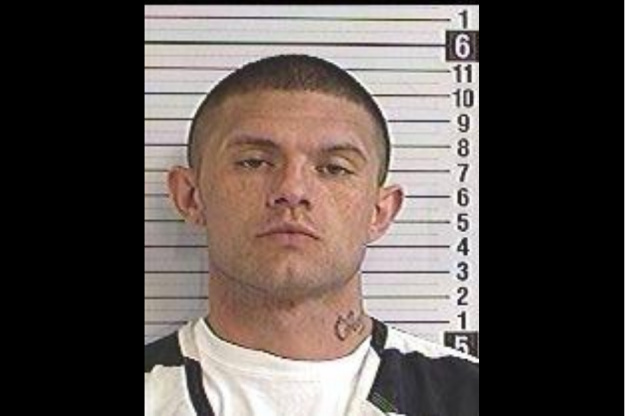 PANAMA CITY — An inmate now faces additional charges after he allegedly was caught smuggling narcotics into the Bay County Jail via methamphetamine-drizzled drawings of the sun, according to arrest records.
Two other people also have been arrested in connection with the scheme.
BayCounty inmate Robert Daniel Eanes, 27, on Monday was the latest to be charged with smuggling contraband into a detention facility. Officers discovered through jailhouse phone calls and recorded visitations that Eanes allegedly had been getting “ice” methamphetamine delivered to him on a series of drawings sent through the jail mail service, court records indicated.
Heather Kristine Buehler, 29, and Christopher Charles Inns, 35, also have been charged in the case as senders of the letters. Eanes faces an additional $20,000 bond for the charge but already was being held without bond after he failed a urinalysis during his release on narcotics-related charges.According to the Bay County Sheriff’s Office, Eanes devised a plan to have the two co-defendants send him narcotics through the mail system. He allegedly was receiving hand-drawn pictures of the sun, which had been saturated with a methamphetamine solution and then dried. Once the picture arrived in the mail, Eanes could eat the picture and experience the effects of the drug while incarcerated, BCSO reported.Eanes had been in jail since June, and officers got word of the mail scheme Aug. 10. Investigators reviewed videos of visitations between Eanes and Buehler, where Eanes would coach her on melting down a substance and putting it in the center of the sun on a hand-drawn picture, officers reported.
In one recorded phone call from Eanes, Inns said Buehler left a batch of letters at his house and that he had put them in his mailbox destined for the jail. BCSO reported that by doing so, Inns facilitated the contraband being delivered to Eanes.
Officers intercepted one of the packages, which contained three letters addressed to Eanes. Two of the envelopes contained greeting cards and photographs. The third had two notes that appeared to have been written by Eanes’ children and a hand-colored picture of the sun, which directly matched the instructions from the recorded conversations.
A sample taken from the center of the drawn sun tested positive for methamphetamine, BCSO reported.
Eanes already had been facing methamphetamine-related charges. He posted bond after an April traffic stop and discovery of meth, only to be arrested the next day during another traffic stop led to the discovery of meth, court records stated.
The arrests also violated probation for Eanes’ two co-defendants. Days before his arrest, Inns had pleaded no contest to drug-related charges and sentenced to three years of drug offender probation. Buehler was sentenced to three years of probation in 2014 for felony retail theft for stealing about $81 worth of merchandise from Wal-Mart.

You know how they say don’t judge a book by It’s cover? Well shame on me. Here I was willy nilly thinking that these criminals were all just the biggest group of idiots with this guy getting tossed in jail originally for stealing shit from a Wal-Mart. Sure enough seems dumb. But then on the other hand of the same spectrum we have the same guy that knows the chemical process to melt down methamphetamine onto paper and was smart enough to devise a plan to get high in prison. It’s so simple and so genius. Just splatter that shit on some construction paper and say a kid sent him a drawing or some shit that you’re gonna hang up in your cell. C.O. probably wouldn’t even know when he walks across this guy’s cell with the drawings half chewed and the guy on the ground rolling face high as a kite. Probably not the cleanest of highs with a low purity rate and shits been stepped on with food coloring to match the same glow that the happy yellow color the sun produces probably, but for prison standards guy pretty much is getting down on Blue Sky pretty much. When’s the last time I ever came up with a scheme that brilliant? Never in a million years would I know how to make some super chemical drug and paint them Bob Ross style so people in the penitentiary system can get high. They might not be the best people when it comes to responsibilities and may not have the real life acumen to make the best life choices but I’ll never doubt a low life criminals imaginative brain when it comes to finding a way to abuse some sort of recreational drug.