BBC– The bird fell into a container of chicken tikka masala while trying to scavenge a piece of meat from a food factory bin.
He was rescued by workers at the undisclosed site in south east Wales and picked up by a volunteer for Vale Wildlife Hospital near Tewkesbury.
Staff at the centre used washing up liquid to clean the gull’s feathers.
They managed to return him back to his original white colour but have not been able to wash away the smell.
Lucy Kells, a veterinary nurse at the hospital in Worcestershire, said: “He really surprised everyone here – we had never seen anything like it before.
“The thing that shocked us the most was the smell. He smelled amazing, he really smelled good.” 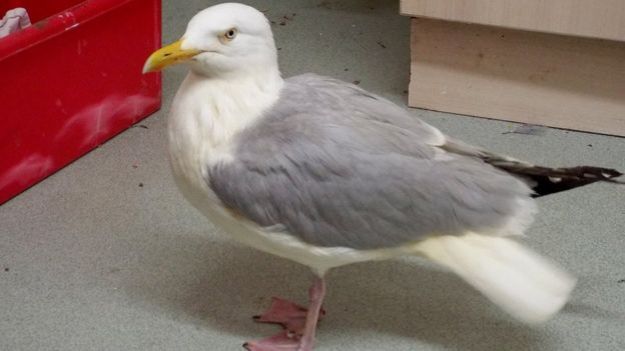 Poor fella. Just trying to live among humans living day by day picking off food that gets scattered all over the ground but got a little too ambitious this one time. Probably thought he had a clear window of time to get the entire pot of chicken tikka masala all to him self. Make away scot free while other scrub birds pick from the bones. Its one of those things where you’re so in over your head you don’t even remember where you fucked up but one second you’re a white seagull and the next you’re orange and you look like a Dr. Seuss character. The main orange is gone but if you ever fucked with curry you know that poor birds skin is still orangey yellow and that smell will stick with him for awhile.