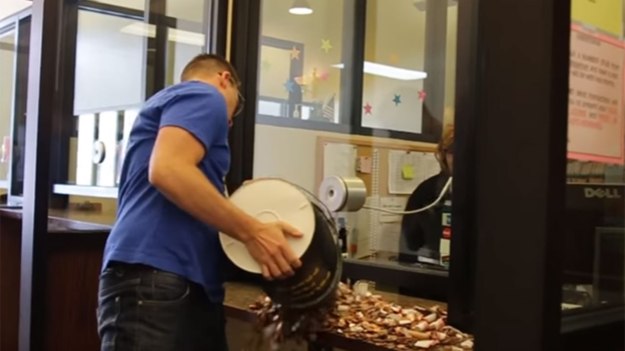 NEW YORK (FOX5NY) – Brett Sanders of Frisco, Texas, used pennies to pay for a speeding ticket because he wanted “to make a big spectacle of it.” He used 22,000 pennies to pay for a $212 fine.
Sanders created a video of the incident that has gone viral. “I’m not a big fan of extortion. I was convicted by a jury for driving 39 in a 30 and was subject to $212 at the barrel of a gun,” wrote Sanders.
In the video, he is seen calling a bank to ask if they would have 22,000 pennies available.
It also shows Sanders bringing the coins in buckets and pouring them onto a counter at a municipal court house.
According to local media, the court clerks brought the pennies to Coinstar locations.
Sanders is reportedly owed $7.81 for overpaying.

“I was on my residential street when I got a ticket for going nine miles over the speed limit,” he told CNN. “I thought it was unfair. I did not injure anyone, and I did not endanger anyone.”

Bro, shut the fuck up. I could care less if you’re a fan of extortion, but the facts of the matter is you were going over. They got every fucking right to give you a ticket because speeding is speeding. To make things worse if you’re speeding in a neighborhood. Like on the highway its one thing. I could care less if you have NOS tanks loaded and doing a buck twenty on the turnpike. But yo if you have kids and someones speeding any bit over you get nervous as fuck. Its a principle thing. Paying in pennies does absolutely fucking nothing. And all the people cheering this guy on can suck a dick to because all of them are saying “Hey man! the government gets the money any ways! He’s just proving a point!” Point exactly. They get the money so why the fuck dump literally the lowest form of currency and walk out. What point does that make? If this guy has any balls. He would lay the two buckets down and stay there and let them count every single penny. If you don’t do that, you’re just being a pussy who wanted to make a viral video.

P.s- if I were that lady who had to collect all of those pennies, which I’m pretty sure they just swept it up, I would pocket that $7.81 and buy some McDonalds.

Double P.s- Yo you know who’s sneaky worse in this? Who ever the fuck is filming this. If you can watch this guy be a dick to a lady with out saying anything, we’re an asshole too.

Yo this guy is seriously one of the biggest assholes ever.

Although Sanders’s latest video places the spotlight on himself, he told The Post that he made it to highlight a problem that disproportionately affects low-income people. During a recent stint behind bars for refusing to show an officer his pistol permit, he said he was both angered and inspired by a senior citizen he met in jail. The man was was serving a week behind bars for unpaid traffic tickets that led to his arrest and imprisonment.

“None of his tickets were for a crash or a hit and run,” Sanders told The Post. “They were just traffic tickets, but his license had been suspended and he’d lost his job and couldn’t pay and ended up sitting in jail. It’s a perpetual system and it disproportionately affects the poor.”

Bro you were just in jail because you refused to prove you had a right to carry a pistol! Get the fuck out of here. Guns, cars, property, all of that shit is a privilege to own that comes with responsibilities and shit. You don’t get to play like you’re some disenfranchised citizen when you can afford to own these things and then play the part of a poor humble guy who has been beaten down by the system. If you can’t deal with all that comes with owning this shit, you, that old man who repeatedly drove illegally can go kick rocks.