SUNRISE, Fla. – Florida Panthers Executive Vice President and General Manager Dale Tallon announced today that the Panthers have agreed to terms with forward Jaromir Jagr on a one-year contract. As per club policy, terms of the contract were not disclosed.
“Jaromir is a Hall of Fame player and had an excellent season playing alongside Aleksander Barkov and Jonathan Huberdeau,” Tallon said. “His track record speaks for itself, ranking third all-time in points and goals. He has been a great fit with our organization and we are excited to have him back for next season.”
“Jaromir has had a tremendous influence on our younger players and has been a key offensive contributor on our team,” Panthers Head Coach Gerard Gallant said. “We are happy to have him back as we look to build off this year’s playoff appearance.”
The 44-year old Jagr led Florida with 66 points (27-39-66) in 79 games this season, while recording two assists in six Stanley Cup Playoff games. During the 2015-16 season, the 6-foot-3, 230-pound native of Kladno, Czech Republic passed Gordie Howe (1,850) to claim third all-time in points and passed Brett Hull (741) to claim third all-time in goals, while also becoming only the sixth player in NHL history to reach 1,100 assists, the fifth player to reach 200 postseason points and 10th player to reach 1,600 NHL games.

Well Jagr fans, time to add another 68 Jagr sweater to your collections because our ageless wonder has committed another year with the Cats. There has to be some people out there who thinks this season was a disappointment with The Panthers getting bounced in the 1st round. 2012 all over again. Some people are still on the edge of their seat probably waiting for Jagr to score a post season goal which hasn’t happened since he was a Flyer and because he wasn’t a major contributor in the 6 playoff games this year ( 0 goals, 2 assist) that maybe we should look past him. Well guess what, The Czech Mullet is here to stay, and i strongly believe end his NHL career here.

A lot of discussion of what to do in the off season now and I have seen a lot of questions about the top line of Huberdeau/ Barkov/ Jagr. Barkov was never really in question but for some absurd reason i saw people saying maybe trade Huberdeau because he can bring in alot. Maybe for a guy like Malkin because Malkin is more seasoned and bring in some other pieces and saw some don’t resign Jagr because Huberdeau and Barkov alone is good enough for that line. Wrong. Im not a big stat guy mainly because i get confused as fuck how to read them and the whole corsi/Fenwick chart nonsense makes my brain hurt but what i do know is 5 on 5 by the end of the season that top line was 2nd in production in the entire NHL only behind the Kane/Anisimov/Panarin line. Does it suck that they couldn’t get get much going in the playoffs? Absolutely. But there are still 82 games to play before the playoffs and at some point that line is going to get cooking. They couldn’t get it going when they needed to in the playoff with over turned goals and what not, but solely waiting for that day when you see the smile on Jagr’s face when he nets one in the post season is worth his 4 million dollar contract alone. So for about 1.5 million dollar difference between the line Kane/Anisimov/Panarin line and our top line, its worth it to keep the guy around for similar production at a discounted price.

The new logo/jersey/sweaters. So far not an over whelming popular look but fuck it, I Like it. And people hating on it borderline makes me want to love it. Some people say its too boring or too much like a soccer team. I never hated the older iterations of the logo with the leaping cat, but i never fully loved them. There was so much going on with it. It was loud and brash, which some people like, but it was never a selling point for me. I like this new look. Its simple, bright, clean, has some basis of a military patch which is Vinny Violas thing hence always doing some sort of military relationship building foundation before the season starts. Its somewhat classic like the Canadiens sweater with the horizontal stripes and i always love the laces. The old logo just screamed 90’s Expansion team to me, which isn’t a bad thing, but I just like that this one is just different. Expansion teams for the most part are usually some animated Animal logo. Sharks, Ducks, Preds, Thrashers, wild. They were all some sort of fierce looking animal but id rather a more muted logo and have the players do all the talking by winning. This panther looks somewhat regal or noble and id like to think that makes all our players seem more skilled. Then again, this is just a somewhat of a leaked drawing and nothing official from Panthers front office. Back when George Richards tweeted discriptions of it, there was suppose to be teeth on it and who now with Jerseys going to addidas we really wont know till we see them but fuck it. New Year, new look, more skilled and experienced. Thats what we’re looking forward to next year. 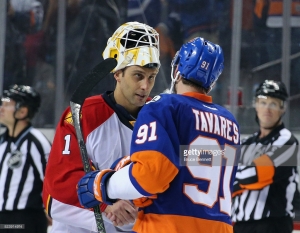 I never had time to formally post my thoughts on how the playoffs went down for the cats because I’ve been working elsewhere so im saying this now. Plz when you read this, read this in a Liev Schriber voice/ come up with better words because im not as eloquent as him in 24/7. The playoffs were a disappointment. I said from the get go that I started becoming nervous when I saw everyone picking the Panthers to win that series. Everyone loves an upset until its your team and unfortunately that is what happened for me and how ever many hundred thousand Panther fans here in south Florida.

I picked the Panthers to win in 5. It was very presumptuous of me. I said that i loved the fact that The Islanders were with out their starting goalie. Well i underestimated Greiss to the largest extent possible. The guy was a revelation. I feel like we’re getting into a trend where back ups come in towards the end and show up in the biggest way possible these past 2 playoffs. We saw it last year with Scott Darling who stepped in when Crawford needed it. This year we have Greiss of the Islanders and Matt Murray for the Penguins being an brick wall with the focus of a Buddhist monk in net. The Panthers just couldn’t get one pass Greiss when we needed it.That was by far the most unexpected factor in the series, another factor being John Tavares. I said from the jump that Tavares can single handedly carry a game on his own. I thought that was just going to be game one but it turns out i was wrong. Guy can carry his team a lot against a fresh young team like the Panthers. Then of course there was Luongo.

During the hot streak in December i knew from there on that Luongo was the MVP of the team. The players even agreed that Lu was their rock and with his numbers in the regular season that was never in question. But that was the regular season and this is the playoffs. There was always a stigma around Lu since Vancouver. Every time Boston comes around and im at the game I’ll always hear comments about Lu and Game 7 of the Stanley cup Finals in 2011. I even hear it from some Blackhawk fans when Lu was still a Canuck. I know there were lapses on defense in Game 1 and I know i can’t reasonably expect an aging Goaltender to play at his peak in Double OT. But for some reason I still have Luongo winning a gold medal for Team Canada in the Olympics and somethings tells me he can show up in biggest moment possible when the pressure is on his shoulders, but it wasn’t this year, and its a big of a question mark as “where is the G spot?” heading into the future.

I recall back to a game in the regular season where I knew if some issues were going to carry over into the playoffs that would be their demise, it would be that they couldn’t shut out this one game when they were leading 2-0 for 50 minutes and some how the team came back and beat them, that team of course being The New York Islanders. We took leads in the series as early as 2 minutes into Game 1 but from there Greiss and The Islanders as a whole adapted came out the victor. This time around in the Playoffs, as bad as it was, it was a result I was willing to accept. A lot of relationships between the 2 teams. Bill Torrey being our first GM who also built the Islanders dynasty, Their dynasty team’s Captain being our commentator, and even down to the fact that Roberto Luongo was drafted by the Islanders being told he was the future there before getting traded here for his first and memorable stint with the Cats. The Islanders took 20 years to get over the hump of being a 1st round exit, and finally they got it. Watching these two teams go at it was one of the most underrated playoff series so far, and I loved every second of it right down to the handshake, especially because from watching them go, you just know in your bones, its not going to take 20 years like the islanders for the Panthers to get over the hump.

Until next season or if i find any other Panther related thing worth blogging.