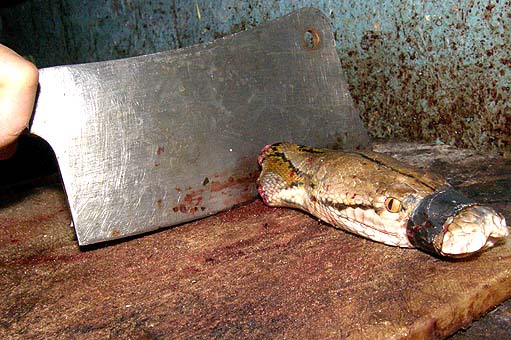 Berlin (AP) — German customs officers say they have found and destroyed 20 rotten snake heads found in a package that had arrived from Nigeria.
A spokeswoman for Munich’s main customs office said Wednesday that officers discovered the snake parts when they X-rayed a three-kilogram (6.6-pound) package last week.
Marie Mueller said that when officers then opened the parcel the stench of the rotten snake heads was “simply overwhelming and unbearable.”
Mueller said the snake heads were immediately burned to prevent the spread of possible diseases.
She said the customs office has repeatedly intercepted packages from western Africa with snake heads which are sent to Germany as a delicacy.

What do I always say, anything dealing with snakes is not cool.  Sure I like the idea that they’re dead in a box but still, not cool. Let them die off in the ground with vultures scavenging their bodies or something. Mailing them into some European country is not cool either but by far the worst part is the implication that it seems like these Germans were gonna eat them as some sort of delicacy. Fucking Gross man. That’s what I hate about high cultured pretentious delicacy foods. No one can ever rationalize that caviar taste better than a Cheeseburger. Made from cow meat. And not some un-eaten part like cow dick or ass hole or hoofs. Just straight up 100% pure angus what ever part hamburger meat comes from. And you know what? When I go to throw one on the grill the smell doesn’t immediately make me want to vomit my insides out. See nature teaches us things in this world to keep us from doing things. It’s like a life lesson from nature and nurture. Oh it smells like a rotting pile of shit and I might just pass the fuck out if wind blows a hair stronger than the driest day in an Arizona summer? Probably shouldn’t eat it. If a girls pussy smells enough in the heat of sex to make you reconsider going down on her, then she proooobably has something. Same goes for guys too, because it’s 2017 and we’re progressive. See, life lessons. Don’t want herpes, don’t go down on it. Don’t want your insides liquefied then don’t eat rotten snake heads from west Africa. I don’t care if it’s labeled as a delicacy in the rich crowd. The difference between rich ass holes who eat this and poor guys eating this is the rich guy doesn’t care about him shitting out a snake because he’s rich as fuck while you’re probably gonna be in the hospital with insurance premiums shooting through the roof to get your stomach pumped.