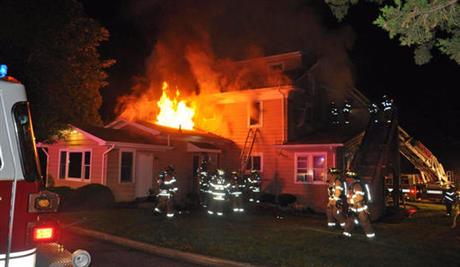 TOMS RIVER, N.J. (AP) — Firefighters have put out a fire at an office building in New Jersey after waiting for 100,000 rounds of ammunition stored inside to explode.
The fire at the building in Toms River burned for two hours Thursday morning and ignited the ammunition. Toms River police spokesman Officer Ralph Stocco says that the building’s owner is a competitive shooter.
Toms River Fire Department District 1 Chief John Gonzalez told the Asbury Park Press ( http://on.app.com/2ao7wOY ) that the ammunition was popping for about 10 minutes. It took another few hours for the fire to stop smoldering.
No one was in the building at the time of the fire and no one was hurt. It wasn’t clear how the fire began.

Yo what kind of office building has 100,000 thousand rounds of ammunition readily available? I mean i guess the guy was a competitive shooter but why the fuck would you keep that shit in your work place. Like i don’t keep a sack of shotgun shells at the restaurant willynilly. Definitely wouldn’t use my work place to house enough ammo for a militia because that would be dumb and at the price of ammo these days it would be like leaving 40k at the office depending on what this guys running. And also if you’re a competitive shooters how do you not have this shit stocked in one of those gun safes. Pretty sure if you had one of those you would need napalm and thermite to eat through the thick layer of steel. See I try to agree with these gun people, but not when it comes to inconveniencing others. If i were a firefighter and i had to get out of bed early to beat up the fire at your house, I don’t want to have to wait for your armory inside what ever LLC you got in that building to explode. We had a win for the Gun owners the other day at the Modesto Costco. This one takes an L for keeping firefighters from doing their job because they’re dumb.