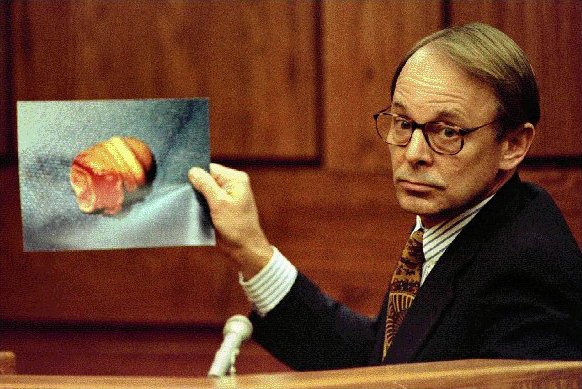 Mediaite- When comedian and television personality Steve Harvey isn’t too busy hosting Family Feud or being lampooned by Saturday Night Live, he hosts a syndicated daytime talk show called The Steve Harvey Show. The program features regular daytime fare, but Monday’s episode featured Lorena Bobbitt, the disgruntled ex-wife of John Wayne Bobbitt — the man whose penis she famously cut off in 1993.
Bobbitt appeared on The Steve Harvey Show to discuss domestic violence awareness and prevention, which she has become an advocate for. She recently founded Lorena’s Red Wagon, an organization dedicated to prevention domestic violence and helping those who’ve suffered from it.
Good things all, but that didn’t stop Harvey from joking about Bobbitt’s… erm… “past aggression.”
“How did he bring up the subject,” Harvey asked her, wondering if she and her current husband had ever discussed the famous 1993 incident and the resulting trial. The comedian even closed his eyes and swallowed slowly to goad some laughs from the audience.
“He never brings it up,” Bobbitt laughed in response.
According to Bobbitt, her ex-husband — who had his penis reattached and starred in a few porn films — has since tried to reconnect with her via telephone. Yet whenever John Wayne has called, Lorena has ignored him and “always deleted his number.”
Bobbitt briefly resurfaced during an incredibly awkward CNN interview back in 2010.
Check out the clip above, via NBC.

We all know this is like a booty call to your ex. There’s no real reason to call your ex. Anything you left at her place can be replaced. You don’t want to be friends. You want to have sex again and try to remain being unattached. Now there is a slight caveat that in this case, in which the guy got his dick sliced off and chucked into a field, but aside from that its the same. Worst part about it is no chick really wants to fuck you anymore because usually the thing you’re suppose to use got decapitated. Which begs me to wonder why the fuck he’d want to call her. I mean is that just how crazy in bed Lorena Bobbitt is? So good you’re desperate to trot your half dick into the pussy that sliced your dick off with a meat clever 20 years ago? Or is it the fact that she might be the only one to know what his dick was so he’s trying to guilt some anal sex because of the beheading? Either way I mean she kinda does owe him a life time of blow jobs right? At least that. Maybe not on a legal scale but morally its the right move.